Not a whole lot of shaking going on down here. My car is still in the shop. It spends more time there than it does in my driveway. Unfortunately the previous owner of my car thinks he is a mechanic and did some work on Scarlett and we have done nothing but fix his mistakes. Recently, I spent quite a bit of money and 3 weeks downtime getting the bushings replaced in my rear end. Well, not MY rear end but Scarlett’s. Bill knew they were bad and we hoped that would quiet some of the noise from the trunk. It didn’t. They then fixed an exhaust leak. Still noisy. Now they found the shock that was replaced a year ago was put in wrong. The drivers side window on my car no longer works. Bill tore it apart to try and fix it but it’s not fixable. We have ordered the switch to repair it and Trace will bring it down when he comes.  This is what the inside of a car door looks like if you ever were curious and I did drive my car a few times like this until I couldn’t get the door opened from the INSIDE. Lucky for me (and Bill) that I was home when that happened. He has that issue fixed also, another prior mechanic screw up. 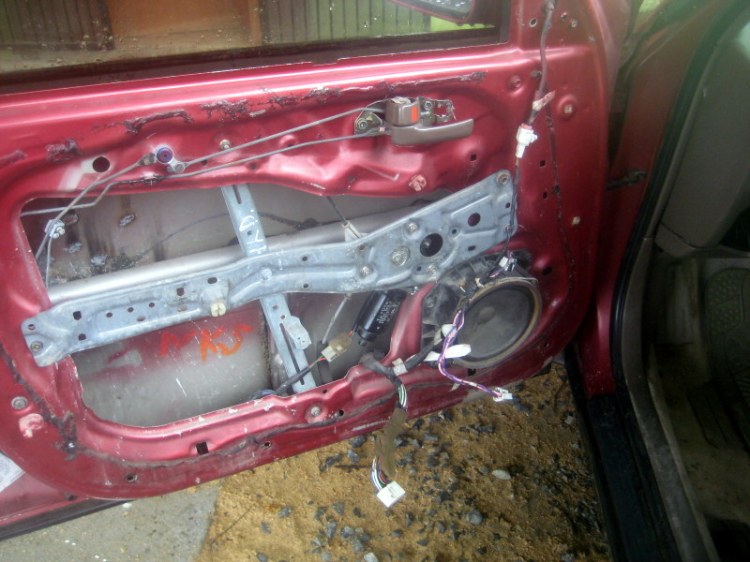 Last Friday we went to Susan’s house for a late lunch with Chuck and Nancy and Susan and her friend Kate. We ate at the table on the deck and afterwards we sat around the table talking. All of a sudden there was a crack and a whoosh from under the deck. It was LOUD, like a crack of lightning. First thought was that the cistern blew a hole but when we went down under the deck and were assaulted by the smell we knew it was the septic pipe that had broken. Holy shit. Literally. It was fixed before we left.

On Saturday we went to Liz’s so Bill could follow up on her dryer repair. I got lots of plant cuttings from her while we were there. It’s so easy to start things on the island and this is the perfect time of year to plant. As soon as we got home Craig came out and asked us if we could go down to near Coco View as Cleo had been in an accident. Craig has been really sick with a bronchial virus so we jumped back in the truck and headed down. When you have a narrow winding 2 lane road with a pot hole big enough for a baby hippo covering one lane of the road, hello. Accident producer. The accident is the fault of the municipality. Seriously, it is. They don’t fix the damn potholes on this island correctly so they keep re-appearing. Luckily Cleos’ crash was minor. The truck in front of her stopped to proceed slowly over a huge pothole and she stopped in time but the roads were wet and slick and she skidded into the back of his truck. No injuries, minimal damage but a huge pain in the ass. They had to wait for the Transit Police to come investigate. This took over 1 hour. One hour in which there were 3 cars (hers, the other guy and our truck) blocking one whole lane on the only road on the island. When the police (sic) finally came they measured all kinds of goofy shit and I’m pretty sure they did this only because they had a fancy tape measure. Then they gave Cleo a form to  fill out and they took her drivers license. When the cops were done she asked for her license back and they said they would give it to her at the hearing on Monday. WTH? They kept the license? I’ve never heard of such a thing. She took an island friend with her on Monday and did the court thing, paid $30.00 (her fine) got her license back and that was it.  Only in Honduras.

The lack of sunshine the past few weeks has forced me to cook more than usual, which means I might have prepared a meal or two. The other morning I made dog biscuits and scrambled my weekly amount of eggs and made brown rice for my every morning breakfast tortilla wrap. I also made a big pot of carrot soup. I forgot how much I love that stuff and how easy it is to make. The carrots they have down here are big and ugly and so damn sweet that you would be crazy to buy the prepared baby carrots in a bag.  Bill is the dog food chef and made a big batch for them too. He browns ground beef in coconut oil, adds rice, green beans, garlic and carrots and cooks it for awhile. We then mix that with a cup of Kirkland brand dry dog food and it disappears from their bowls in a matter of minutes. Not a speck left. It’s crazy that we can buy Kirkland (Costco) stuff down here. It’s ridiculously expensive but it’s the stuff with the least amount of crap in it and now the boys won’t eat anything else. Between their fancy schmancy meals, their home made dog biscuits and their breakfast of yogurt, these boys are well fed. Lucky, or El Gordo is proof that they eat well, they both eat the same amount and are the same size but Luck is gaining weight and Highway is still skinny, of course he is 3 years younger too. And hyper.

On Wednesday Cleo and Craig came over b/c Stef and Brian  were stopping by to introduce us to Brian. He will be house sitting Stef and Jurgens’ home while they are in Germany. She wanted him to meet the others in the “Hood” since he will be here for the next 6 months and he will be the man that controls the water when our cistern is low and we need some water pumped from the well. We had a nice visit with them, Stef told us some more of the things they experienced on the island in the last 15 years. Some stories you don’t believe because they are so crazy, but, they are all true. You can’t make this shit up. Right Lin Coyle?

Thursday Cleo and I went shopping for Christmas gifts for the kids in Oak Ridge. There is an area that is extremely poor and the local ex-pats get lots of gifts and wrap them to give to the kids when Santa comes. I spent a lot more than I planned on but it’s for a good cause. When I stop and think about the Christmas mornings our kids had compared to these children, how can you not buy things for them?

Friday was the gift wrap day @ BJ’s. Cleo and I were pulling out of our driveway and noticed this going on. A Honduran had somehow flipped a big SUV on the curve. We went up to see if everyone was OK and were told someone was still in the car. I called Stef and asked her to call the police. She managed to get the Bomberos and an ambulance dispatched. Then they told us there wasn’t anyone in the truck.

We left and headed to BJ’s. This is the hang out in Oak Ridge that is on the water and the expats have a band called the Banditos who play every Friday afternoon.

We got there around noon and started wrapping. 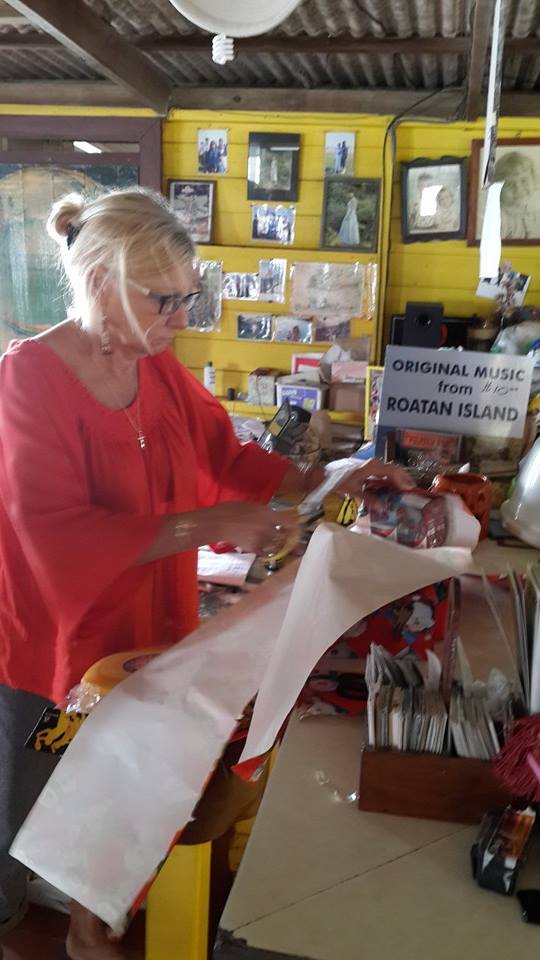 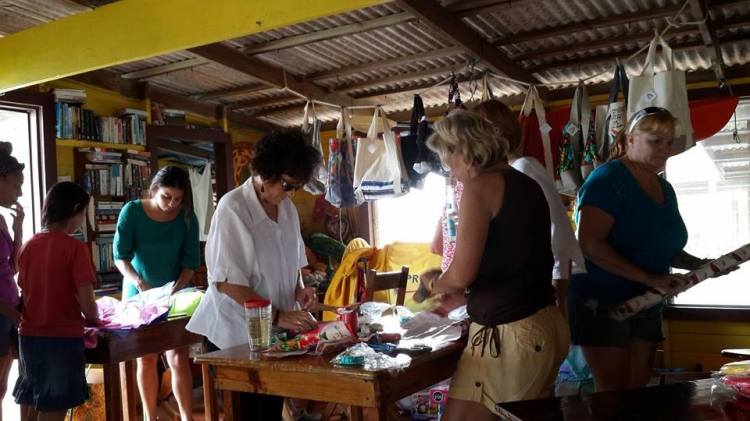 My friend Keri from Snohomish Wa. and her husband are down here so I got to meet Doug and hang out with Keri. She is the one who got me interested in the Pastafarians. They live right on the water and she has a resident octopus hanging by her steps. This is what he looks like when he’s going to church. His species is a Pastafarian Octofarian.

Once the gifts were all wrapped and put in the handmade bags we hung out and played a crazy Christmas game that Marilyn made. She taped small green Christmas tree cutouts all around the outdoor bar, inside the bar, in the bathrooms, everywhere.

Each of the 20 trees had a clue. We were given a sheet with 20 lines to put the answers. Goal was to find all 20 clues and decipher the answers. Below are the clues and the answers, these are not exactly the same but pretty close. It was lots of fun but we couldn’t find a few of the clues and we didn’t win!!

Adorn the vestibule —Deck the Halls

Exuberance directed to the planet — Joy to the World

Yonder in the haystack — Away in a Manger

Assemble, everyone who believes — Come All Ye Faithful

A dozen 24-hour Yule periods — The Twelve Days of Christmas

Perambulating through a December solstice fantasy — Walking Through a Winter Wonderland

Aloft on the acme of the abode — Up on the Rooftop

We got home around 3 and hung out waiting to go to Stef’s going away party at Cal’s. I am still having coughing fits, coughing that will not stop. Last night was one of those nights. We got to Cal’s around 5:30, starving. The place was packed, which means it would take over 45 minutes to get food, I was hacking my lungs up like a person who has smoked all of their lives (I quit in 1973, when I was 3 years old) so we turned around and came home and ate dinner. Bummed that we didn’t make it to dinner but who wants to sit with someone who sounds like they should live in an iron lung?

After dinner Bill sat down to watch some TV and I took my laptop in the bedroom and watched a movie on Amazon Prime. Exciting Friday night at our house!

One of the customs down here is setting off fire crackers ALL THE FREAKING TIME between Halloween and Groundhog day. The other night the church sermon was going on, they were really into it and quite loud, pianos, singing, Hallejuah! BOOM, a fire cracker would go off. Hallejuah, BOOM, another fire cracker. It was almost like a punctuation point after Hallejuah, BOOM.

Thanks Craig for the visual. They are going off again, about every 30 seconds. What is the joy or excitement over a damn BOOM???

I would like to take those damn firecrackers and put them somewhere special. Real special.

Happy rest of the weekend!