06/05/2015 Our fourth July 4th spent on Roatan. We were very low key. All the dogs watched except Lucky, he barked. The pups sat on the steps staring at the sky, I’m glad we were here for their first night of explosions. Bill worked at home all day and I did my airport gig all day. I was also a greeter last Saturday and while making my way through the lines chatting to people someone said my name and then said, “you’re Mermaid On a Raft.” I have NEVER BEEN SO FLATTERED IN MY LIFE. She introduced herself as Lizeth so I kind of followed them through the line and chatted with them (her husband and friends) for a bit. Yesterday as I was getting ready to go into the immigration area I saw them again, they were heading home. Then I recently got a comment on an older blog post from a gal that we met at La Sirena. Her husband just happened to find my blog and remembered talking to us at Jimmy’s. A few of them had on Akumal shirts and we have been to Akumal so naturally conversation ensued. Strong rum punches also encourage conversation..Liza and I have been in touch by email recently and are making plans to get together when they return this fall. Liza, hope you are recovering! (bicycle crash)

It sure is a small damn world.

Being a greeter at the airport is tiring but I LOVE IT! I especially love that I finally got to see my boy Tank yesterday. Kevin and Claire have made him the Blue Reef Properties official mascot and greeter. I saw Kevin come in the airport and he pointed over his shoulder to Claire and Tank in the parking lot. I went right out to see him and once he smelled me he knew exactly who I was. I was so happy to see him that Claire said to me, “are you crying?” Yep!! so happy Tank has a good home, they really adore him, which makes me feel good. I got to see him a second time during our break waiting for the 2:45 United flight to arrive. Sure love that boy!

I really enjoy welcoming all the people coming to the island and talking with them about their visit, answering questions and meeting the whole family. A girl asked me yesterday how I got the gig and did it pay well. I told her I volunteered and no it doesn’t pay at all. It’s just a good thing that we are doing and according to the feedback we get, people really like being greeted by someone with a big smile on their face saying, Welcome To Roatan!

And YAY, Lizeth (from the airport) just friended me on FB!! Thank you so much for introducing yourself, look forward to meeting up with you next time!

I met Nidia from Because We Care again this past week in Pandy Town. She was wood burning names on the backs of the desks and I went to take photos and for moral support. There are 2 classrooms but only 1 teacher showed up. The room next to us was being loud so Nidia went in and had a chat with them. I followed her in with my camera and that instigated a whole other experience. I started taking photos and they got crazy funny laughing at their pics..I’m getting them developed and taking them back to the students when I return from my escapade in the states. 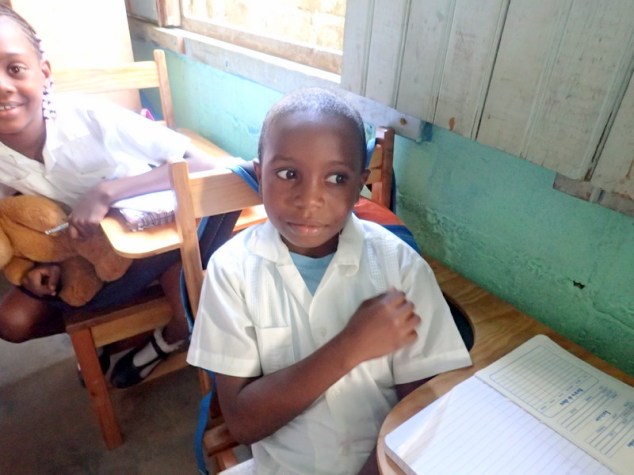 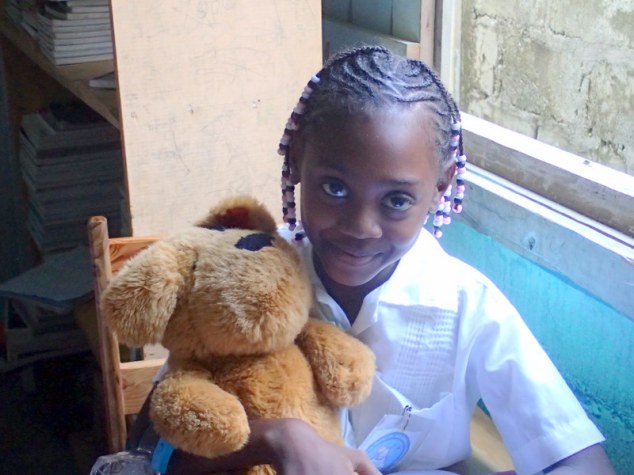 Her hair must have taken hours. She is so pretty. 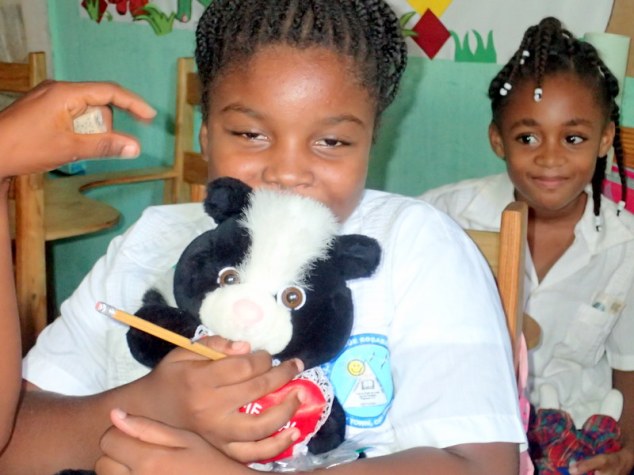 He kind of loves the camera

Not my picture, then he got hysterical when he saw it

This was pretty funny too. Hope I can recognize him by the back of his head to give him this picture

Nidia, AKA Wonder Woman, etching the names into the backs of the desks. 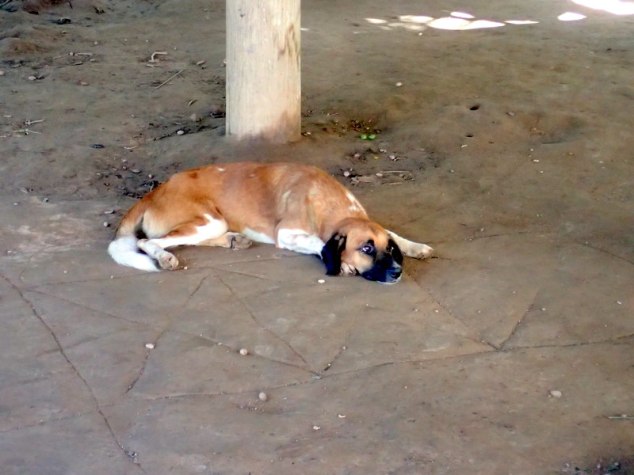 recess and time to eat some mango

or drink some sugar syrup stuff, like Kool Aid but probably worse. 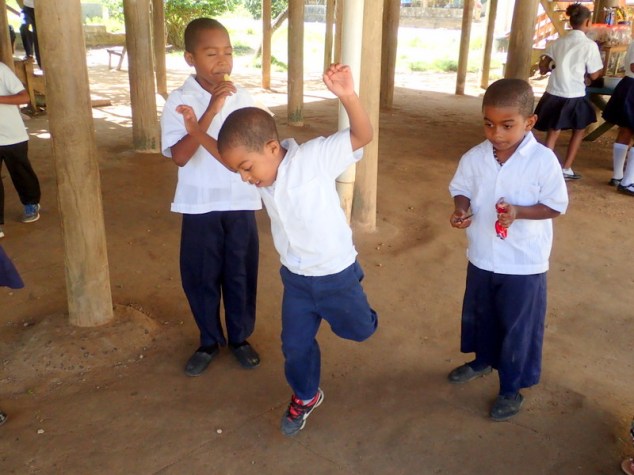 Playing hopscotch, it was drawn in the dirt.

This little boy was adorable. Instead of tossing a stone, they were using a piece of glass. No joke.

This is the snack bar at the school

He asked me to take his picture

So did these sweet girls. There was a man and a young boy at the school when I arrived. They were in the other room passing out school supplies and stuffed animals to everyone.

Had to photograph these 2 also!

I leave on Wednesday for the US for 5 days + 2 days of travel.  I SUCK at packing. I totally am the worst packer ever.  I am physically and mentally incapable of packing  just a few things. My issue is, I can’t just “assign” outfits for a day b/c I may not be in the mood for the outfit of the day and I may not want to wear that option EVER AGAIN. I just put 1 more skirt and 2 more tops in the travel bag and am going to try my damnest to not add  another frigging thing. I am however, taking 2 huge bags and a huge duffle.  Actually, one big suitcase is for my 2 complete headlight assemblies for my car. The ones that were in it were the wrong ones and incorrect voltage. When I  put new bulbs in they exploded, seriously, into little pieces. An electrician here told us in 5 min. time what the problem was and by damn, he was right. We have spent the last 2.5 months trying to get ones here and gave up. I’ll transport them home and I will FINALLY be able to drive after dark! So, I’ll have a few (sic) clothes, ALL THE STUFF I’VE ORDERED ON AMAZON and my headlights and anything I buy to lug home. Yay for shopping in the USA. Happy it doesn’t happen often.

Today we ran down to the Beach Grill to get some stuff from Rob and then went to Rob and Lisa’s homes to see our former puppies, Bandit and Sable.  We took Barrio with us. He puked once all over the floor mat, then I stupidly gave him some water and he puked again. Lola used to get carsick too, guess he needs to travel more. Bandit and Sable remembered both of us but Barrio was a little apprehensive. I actually think it was mostly because he had been car sick. I let him off his leash and he started running around and playing with them. 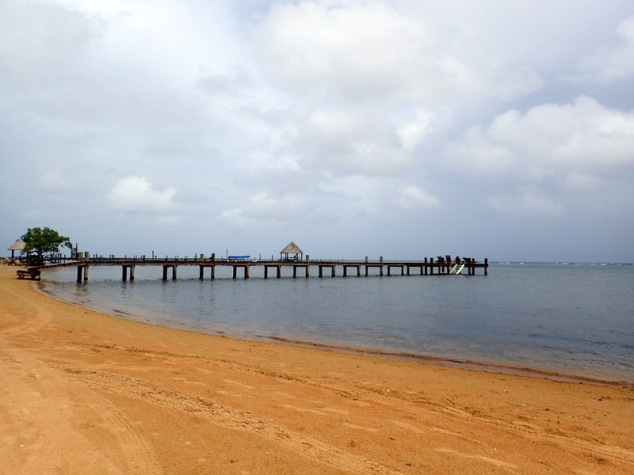 Driving on the beach from the Beach Grill 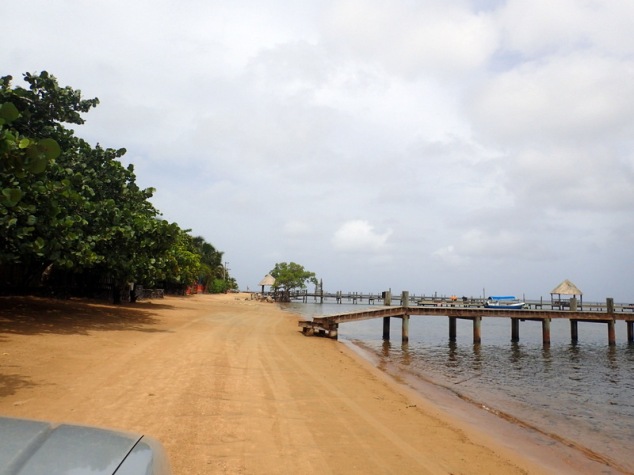 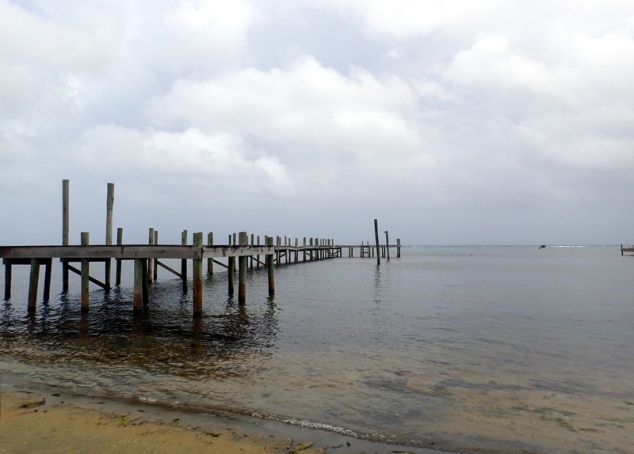 Cool plant but I didn’t really get to examine it so I’m confused..

Sable and Bandit both checking out Barrio

Is Bandit not adorable?? 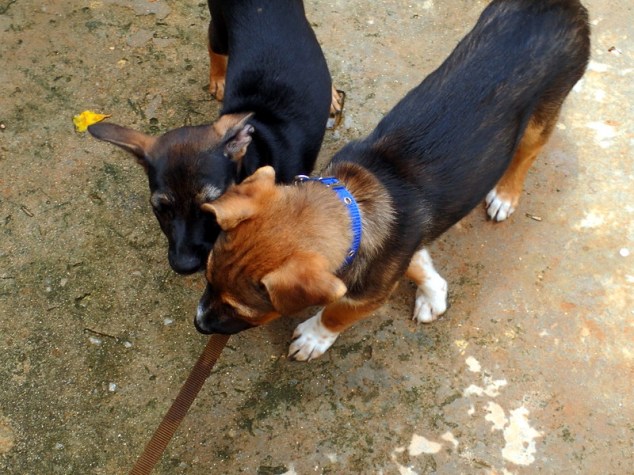 Sable and Barrio, she was the only female pup so she is a tough one!!

You can tell Barrio and Bandit are brothers 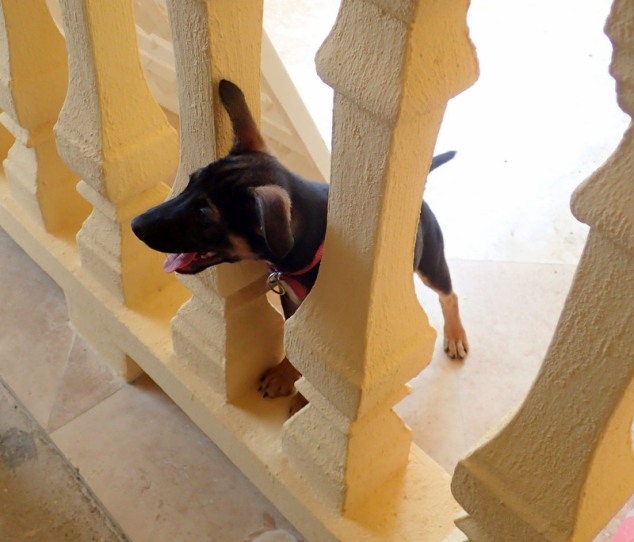 Standing on the dock on the bay. His feet were going between the boards, he didn’t like that. 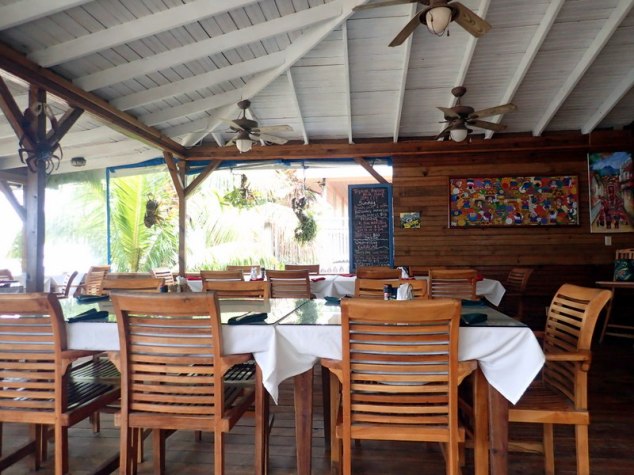 Rob and Lisa’s restaurant, The Beach Grill. A really good restaurant with a gorgeous view!

Sacked out on my foot until I gave him the last little bite of Bill’s burger, he was hungry after throwing up all of his breakfast. 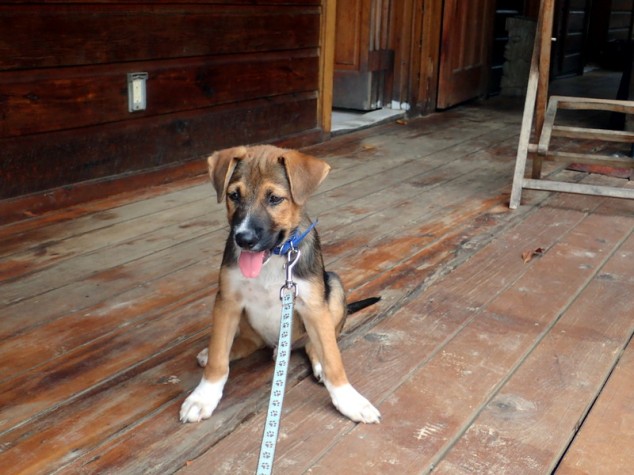 Beach Grill is attached to the Blue Bahia resort, separate owners. Olivia and I stayed at Blue Bahia in 2010. 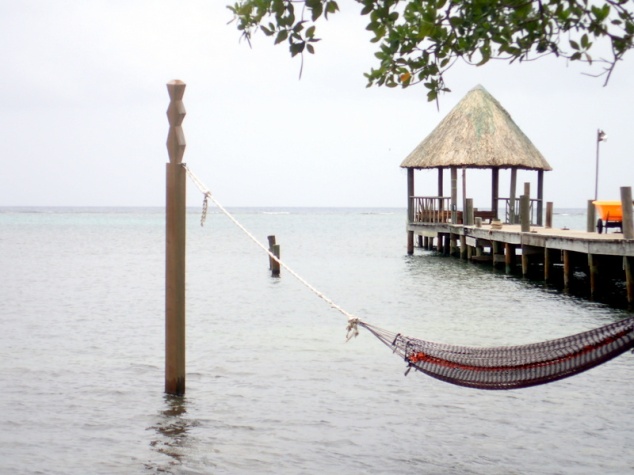 It really is a sucky place for a hammock…NOT. 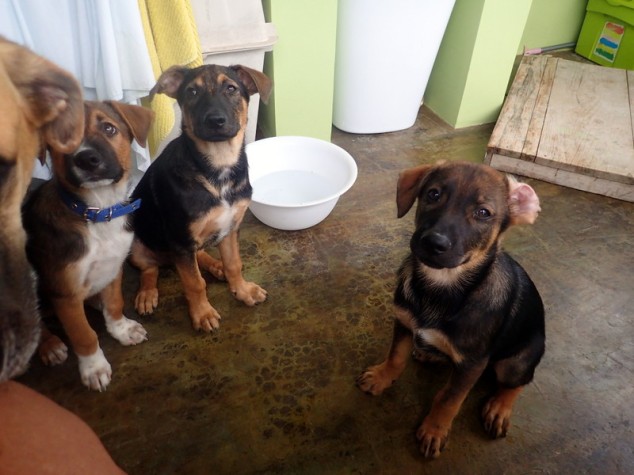 My 3 boys sit until I put their food down. I don’t even have to say a word, they know. 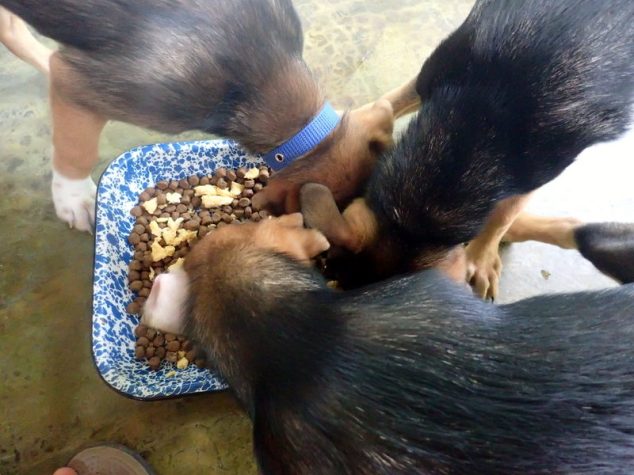 They are still sharing out of the lasagna pan. Maybe it will teach them not to fight over food.

Handsome Highway..he and Lola guard the dish while the boys eat. Never know when a piece will find it’s way into their mouths!

This morning while cleaning up the kitchen I threw something in the trash can. EEWWW. There was a good sized dead lizard in there. I asked Bill, “why is there a dead lizard in the trash.” His response, was, “I didn’t think you would want it laying on the floor.”  My cat does not eat them, only slays them. Although, that statement doesn’t explain the gross lizard tail in my last post.

Life in the jungle.

P.S. I lied when I said this was a quickie..once I start talking, well, you know.

****Thanks Lizeth and Liza for reaching out, hope to see you on the island again soon.****

Final note, I promise. We changed Brindles’ name (Bill hated it) to Gringo..

4 thoughts on “A quickie before I go”