08/31/2015 It’s been a quiet week, which is a nice change. Brenda and I tried to do a vet clinic on Thursday but the guy who was going to help us was so sick we ended up taking him to the doctor.  He had impacted sinuses and was a mess. After a visit with the doc he was on 2 nose sprays and 3 different meds. On the way back to the boat we stopped and treated a puppy, a bigger dog and a severely malnourished cat. The cat was 3 months old and weighed about 2#’s. It is heartbreaking and there is nothing we can do but try and educate the people about feeding the animals. Oh, the 3 month old kittens’ momma was preggo again too. Just what the island needs, more animals.

On Friday I had the pleasure of attending a spelling bee at the Pedro Nufio school in Politilly. I got there around 9 AM, it was (and has been) miserably hot. The school is situated up a very steep road and I had to do a 17 point turn to get my car faced downhill and then hope like hell that my emergency brake was in excellent working condition. I trudged down the dirt road then up the dirt hill to the school, which is situated next to a small cemetery. I walked to the back of the tents, searching for a seat in the shade. There were none. A young boy brought me a blue wooden school desk chair to sit on and I squeezed as close as I could into a shaded area, waiting for Nidia to arrive. In sun like this you will melt in 10 minutes flat. Maybe less if you are not Italian.

The ladies in front of me were the Pandy Town teachers, they recognized me as “the Camera Lady.” I sat there in the sweltering heat for several hours listening to the kids spell. I felt that some of the words were not appropriate words for these young kids who are just learning English, like ALLITERATION. I mean, even the judges had to look up the meanings of the word and the man saying the words didn’t always pronounce them correctly either. I wish I knew for sure the ages but I think it was 4th, 5th and 6th grade. There were a couple really good spellers in the group. You could tell the kids were extremely nervous plus the crowd was loud, lots of kids carrying on, parents talking and arguing. My idea of a spelling bee is the audience is supposed to be “Pin Drop” quiet so the kids can concentrate. Not in Honduras, it’s just not how its done. There was one little boy who knocked my socks off. He walked up, blue shirt sleeves rolled to his elbows, hands in his black pants pockets, this boy was ready to spell. I’ve never seen such confidence is such a young boy . He said the word, spelled it INSTANTLY, no hesitation, repeated it and he was always right. When they gave him the word Prosciutto, I was all WTH?? Most English speaking adults can’t even begin to spell that word but it fell off his lips instaneaously. Many people don’t even know what the hell it is, yet he spelled it. Amazeballs.

The crowd of parents and loud unattended children 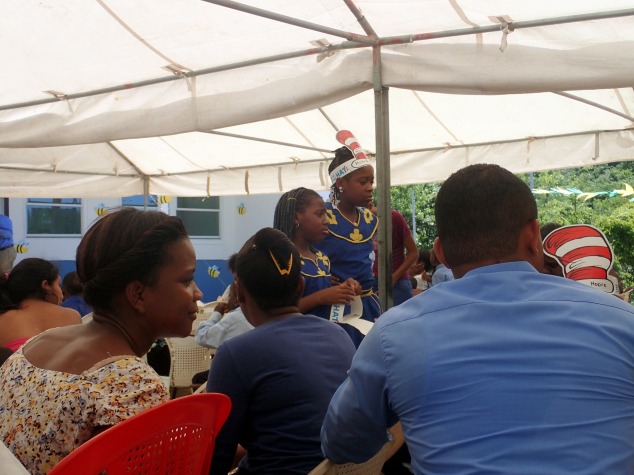 I don’t quite understand this. The beads look cute and her hair is neat, but how do these girls see and sleep with all the beads in their face and hair?? 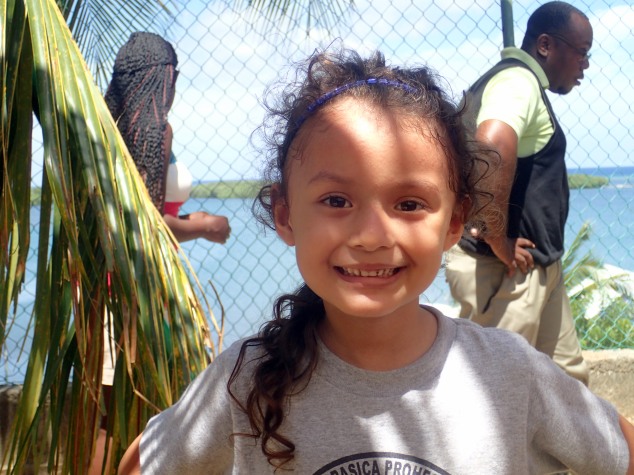 This little girl and her mother sat next to me, her older sister Daniela was in the spelling bee. She is a beauty.

Some of the girls on break 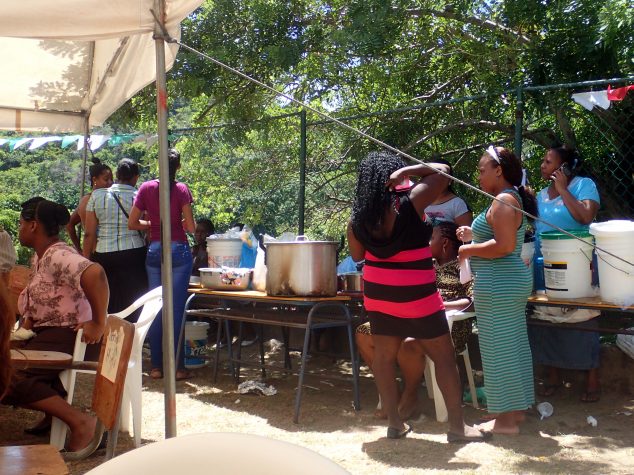 The kids played on this swing all during the spelling bee. Well, for most of it anyhow. Until the accident. 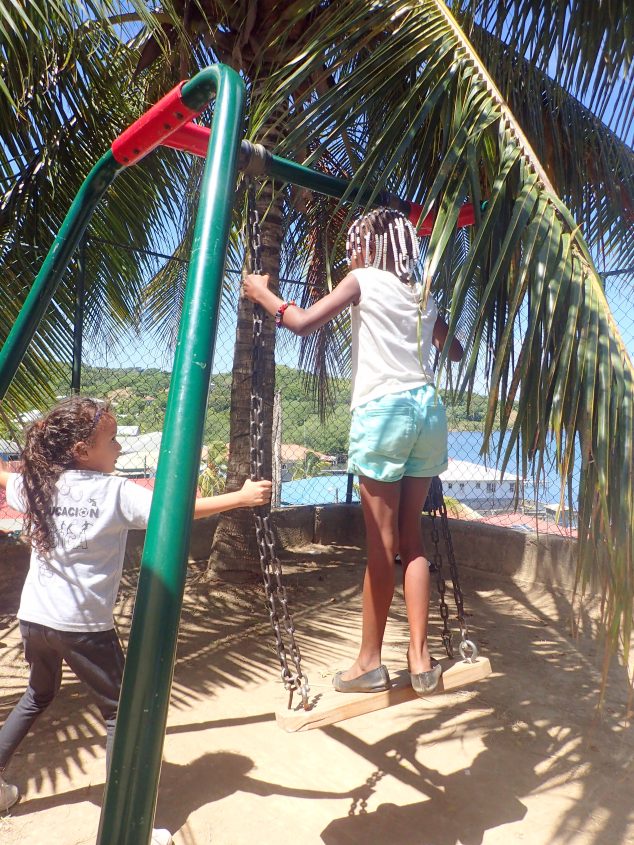 Notice the seat of the swing, it is a big heavy solid board. Towards the end of the contest Nidia and I moved over and sat where the girl in the blue skirt is standing. While sitting there the kids were swinging and a small 2 year old was standing way too close watching. The kids were swinging really high and the small 2 year old who was standing there got hit in the back of the head so hard he got an instant lump. From that point on Nidia wouldn’t allow anyone to use the swing. Finally, peace and quiet. I would be surprised if the small boy didn’t suffer some sort of head injury he got hit so hard.

Little boy in blue shirt can spell like he is 25 years old!

The speller, his name is Denson.

View through the hole in the fence looking out over Politilly Bight.

Honduran safety standards being what they are I was not surprised when I saw the unmarked wire holding up the tent. I saw several people trip over the thing holding the wire (X) and many people ran into the wire with their neck. I just sat and watched in amazement.

The winners getting their prizes 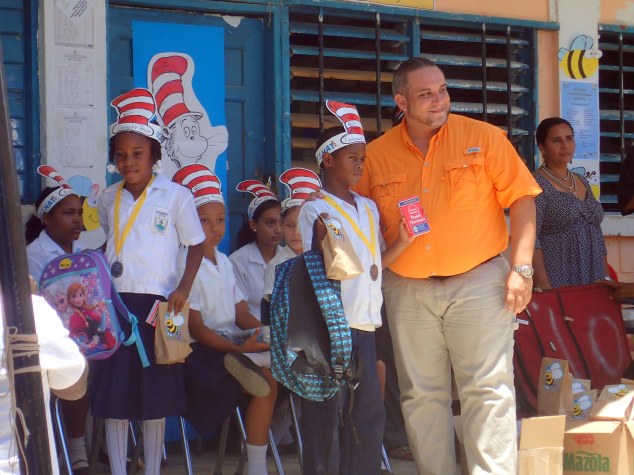 The gentleman in orange is from Zolitur, which is a large mostly non functioning government division that regulates duty fees on items imported to the country for re-sale.

My friend Janice giving one of the prizes.

The lady on the left is Norma Morales, she is the head of the Jonesville School and a super fabulous lady. 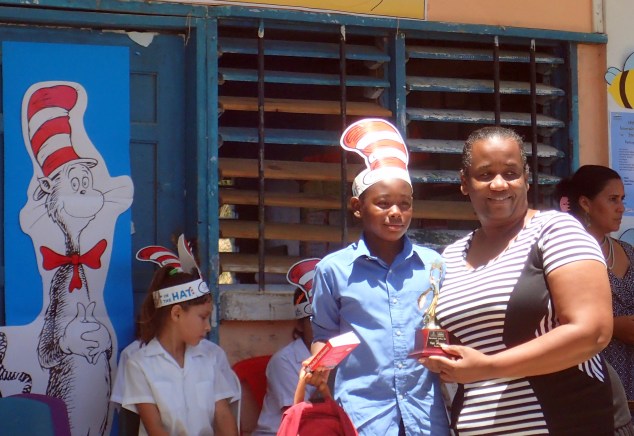 The master speller, this boy rocks..

I only had to back up and pull forward 6 or 7 times to get out of the parking spot at the school. Someone had totally parked me in. I was a hot sweaty mess (and not in a good way) by the time I maneuvered my car out and started down the hill towards home.

August was a typical hotter than hell month with humidity so high you were in a perpetual state of sweat. So be it, I’m not complaining about the weather in the Caribbean, really, I’m not.  I remember when I lived in the states, way back when, 2 years ago, I loved the end of July and all of August. They were typically the only weeks I could really use my ghetto pool. We had always considered putting in a nice pool but given the fact that summer is only 6 weeks long, it wasn’t worth it. That is unless we wanted to HEAT the water. Pools here have the opposite problem. They are too damn hot. I recall going to Parrot Tree with Walter one Sunday and the only way we could be in the water was if we stood under the bridge, where the water was shaded. There was no, “aaah, this feels so awesome” when you entered the water. It was SHIT, “this is hot”.

So this is September now and August forgot to take the heat with it. The other day Bill hooked up a random mister section of hose he brought with us. It was a semi breezy day on our porch so directing the mist was not something we could do.

The mister. The light colored thin rails on the porch are only temporary. They are puppy barriers.

The pups were afraid, then curious, then fascinated, then they were sure it was their own personal drinking fountain. They were biting at the jets of mist that were spraying into the air from the tiny holes. 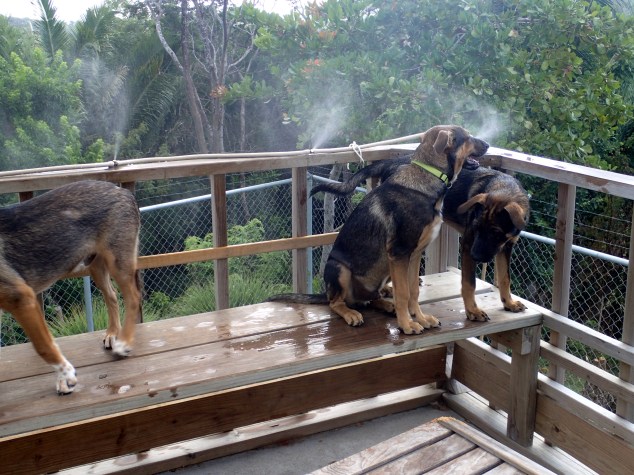 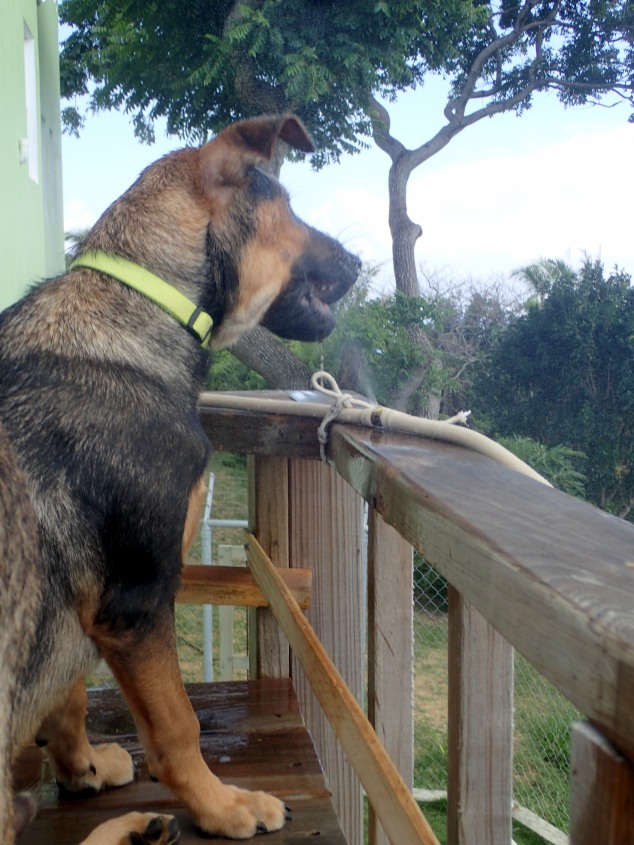 Gringo is digging it

Look at his face, covered in mist 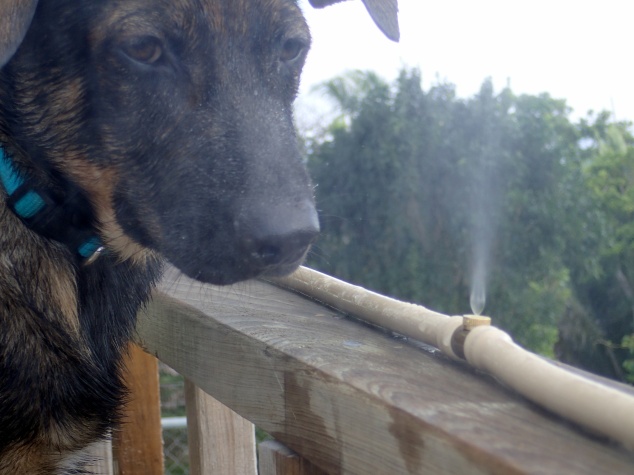 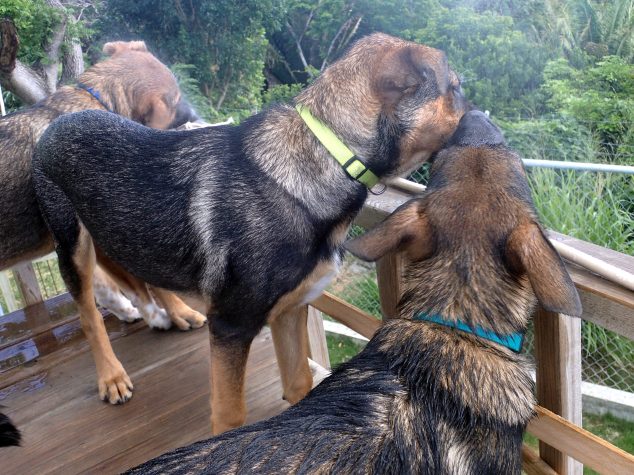 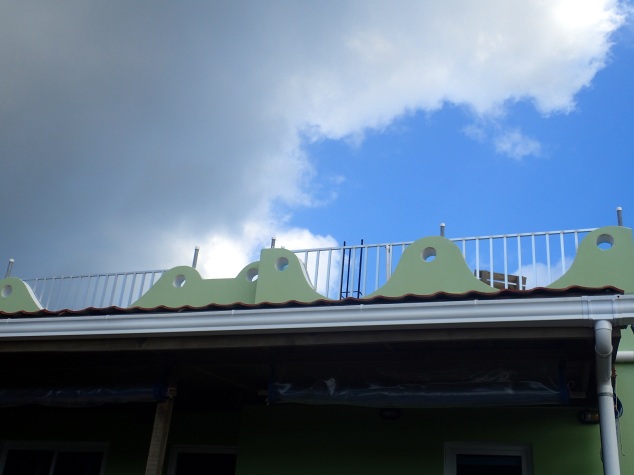 Our drunk rails are nearing completion. Rumor has it they ran out of welding rods..sure they did. This is Honduras after all. The pipes that are sticking up will be cut off. They were put there to do a different type of railing that we decided against. 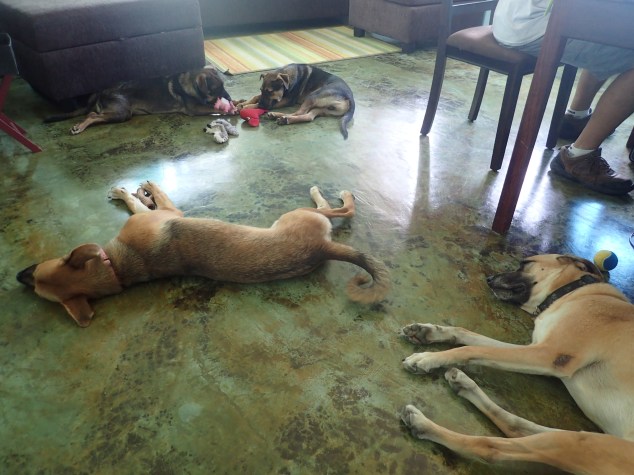 The dogs have spent the majority of the past few days inside, under the ceiling fans. They love it..

Except for Max, who WON’T STAY AWAY FROM FACEBOOK!! 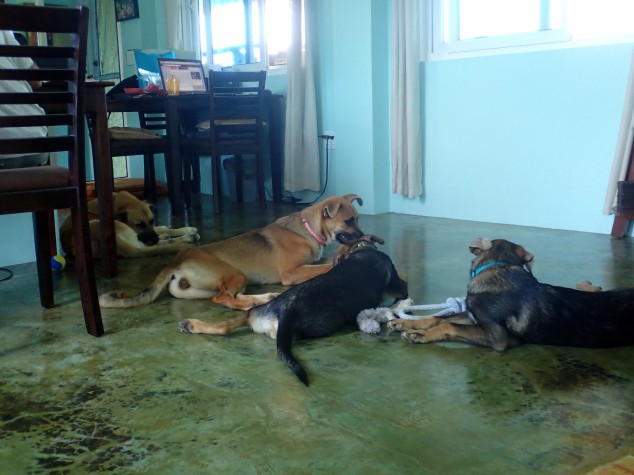 There is one more dog past Highway, 5 inside and Frito is downstairs.. She and Lola can’t be within inches of each other. It would be ugly. 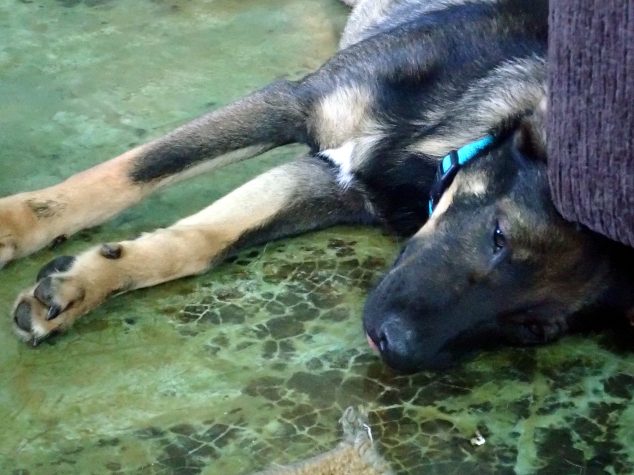 Yes, they were chewing on the rug and then they drug the couch cover off (use it to reduce the sun fading the couch) the back of the couch. Then they passed out.

For the sheer entertainment of it all, I have been sewing dogs faces together, cutting off noses or paws and re-stitching. NOT A DAMN TOY IS SACRED.

I removed a nose and sewed the face closed.

They ate the damn pig’s face..can’t sew him, he’s a rubber pig. Reminiscent of the time Highway ate the face off of a whale shark toy I got for a friends son.

Anything with stuffing meets a swift and sudden death here. There are still 2 crate pillows and 2 specially made dog beds that I am trying to figure out how to make them tooth proof. Aside from a suit of armor, I’m lost, no thoughts, so they sit in a corner of my house.

New dog treat: scrub a huge sweet potato, cut off the ends, slice it 1/4″ thick and bake for 2.5 hours in a 200 degree oven. Then let it cool. The dogs LOVE to chew on it, much better than the nasty chew toys you get in the stores.

I’m going to wrap this up because I want my bed…we took the Beach Boys down to Parrot Tree for a dip. They had their normal fabulous time. They came home, got showered, had lunch and a nice long nap. 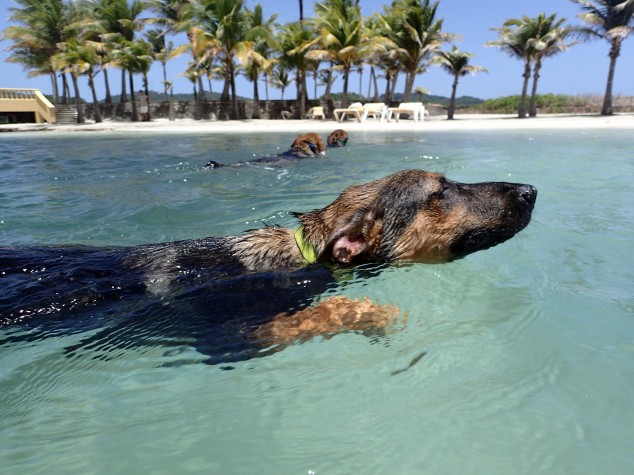 He even goes all the way under and swims 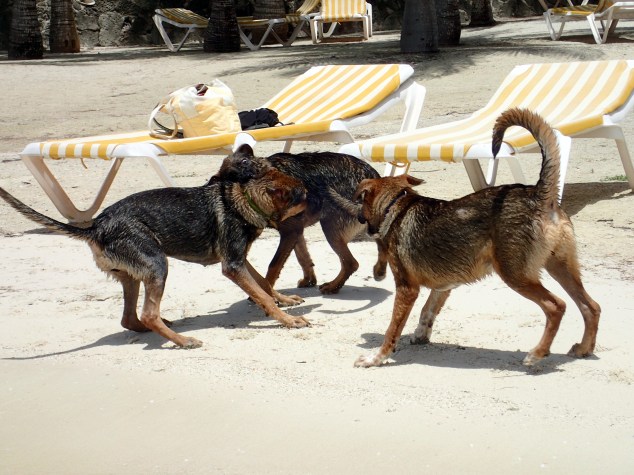 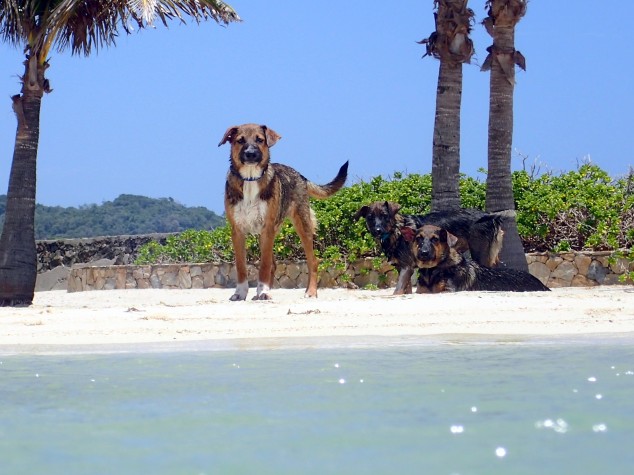 I yelled BABIES to get their attention. They come running when I say COME ON BABIES… 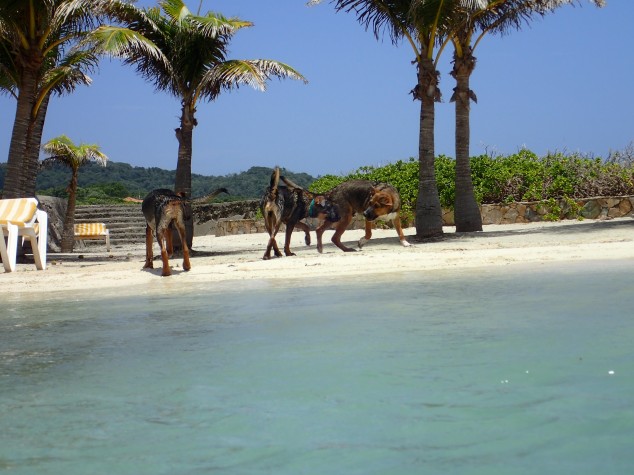 I got them all rinsed off and they rolled in the sand. Again. In case you are wondering, Bill was there, he stood in the shade and chased them back if they ran up the steps..

Just hanging out for the next few days with the boys, may set the sprinkler up and see if they will play in it. Once again, it’s hot hot hot!!

Sunday will be another swim day for the puppies. This time we are driving to Paya Bay with the Beach Boys, one of their brothers and his parents. Should be a fun day. I’ll be sure to take lots of pictures. Luckily my dogs are used to my camera, Dooce was terrified of it. We always felt she thought the camera stole her soul..Who knows, maybe it did.

catch you later my friends..