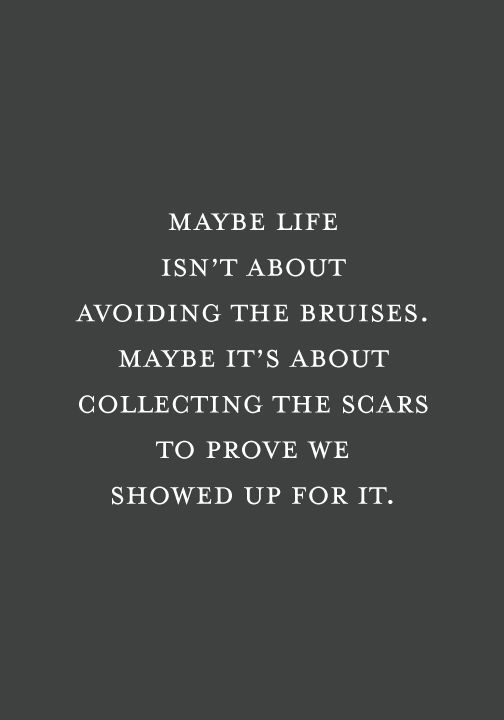 01/31/2016  Saturdays have become a blur to me. This past one was no exception. The weather on the eastern side of the US was causing a major upheavel to the flights arriving from and departing to the US. Many passengers did not make it off the island on Sat., therefore missing all of their connections in the US.. That’s just the way it goes when you travel, Mother Nature is the Ultimate Bitchacha. She wins all the time.

Monday Bob and Rosalie and Marilyn picked me up for our Mondays Don’t Suck days in Camp Bay. We had a great turnout because Franklin and Francie’s kids were here. (3 of them were to leave but couldn’t due to weather) We played some volleyball with the young ones putting us to shame. We forget they can run and we’re old. Well, I should speak for myself, I can NOT run, not even if Channing Tatum was at the finish line. But believe me, I can crawl really fast.

After Volleyball we all cooled off in the angry sea. The waves were pretty high and there was a strong current pushing us westward, it still felt marvelous. We had food, drinks and music. At one point I began a congo line and the women joined in. We danced down around the volleyball net and back up the beach. We plan to do a synchronized version tomorrow that will be filmed. 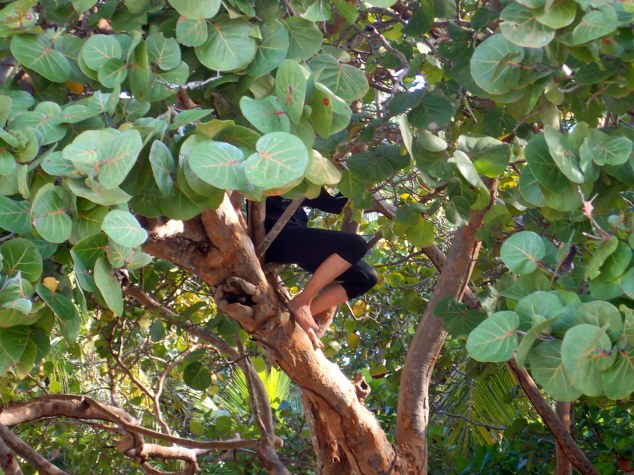 The Duchess of Camp Bay got a wild hair to climb a tree. 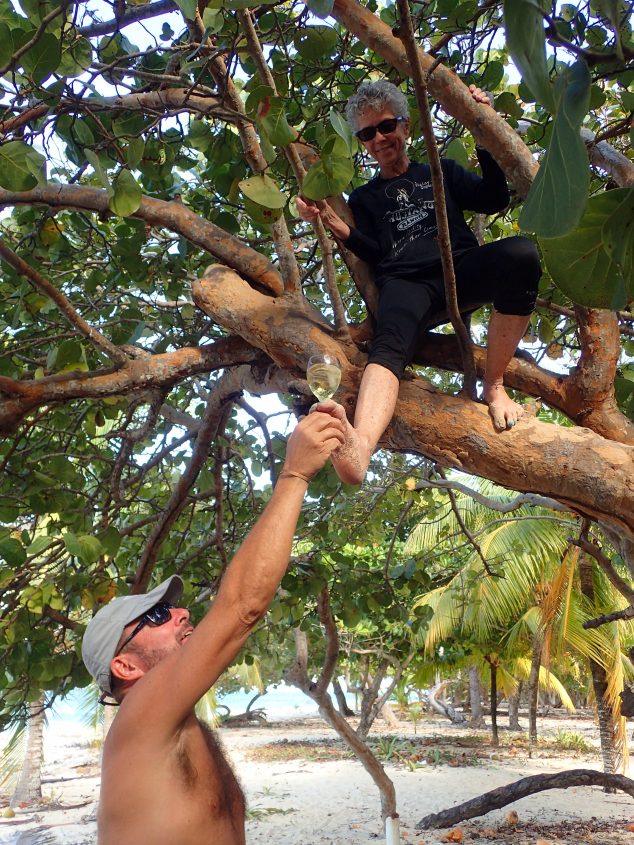 Unfortunately for her she ran out of wine once in said tree. Franklin came to her rescue. 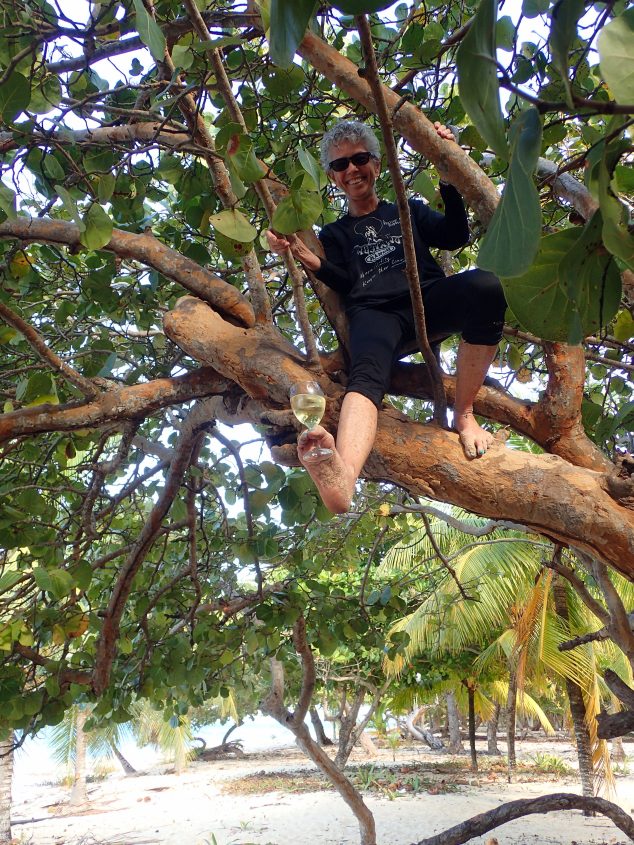 She managed to get the wine from her foot to her hand with no spillage reported.

The Duchess was happy once again. We all strive to ensure the Duchess is always happy.

She peacefully finished her wine, surrounded by branches.

I am so serious. MONDAYS DO NOT SUCK.

Foreigners to our beach. They were rather rude and ignored us when we spoke. Obviously he never got the memo, no mixing vertical and horizontal stripes. 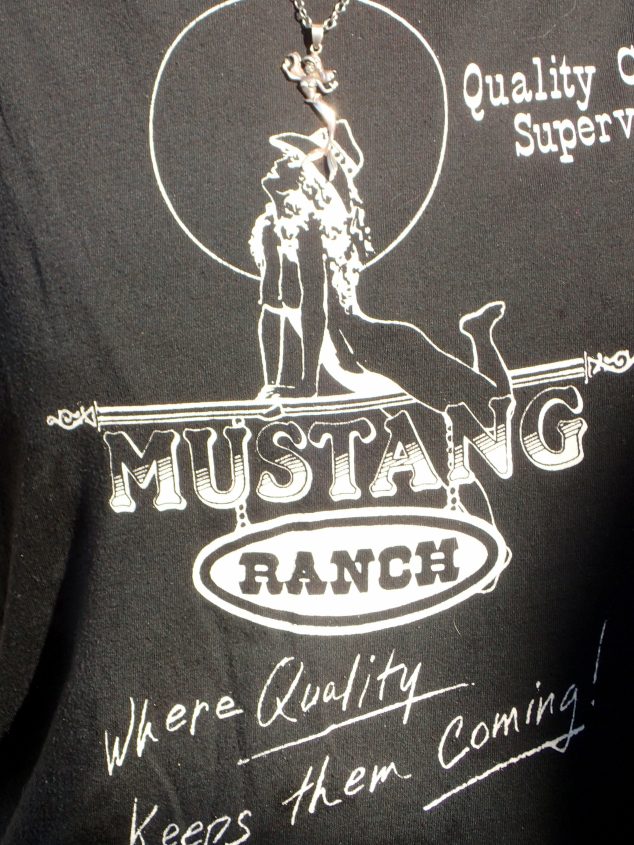 The duchess wore this shirt to the beach. I think that’s her on the front. 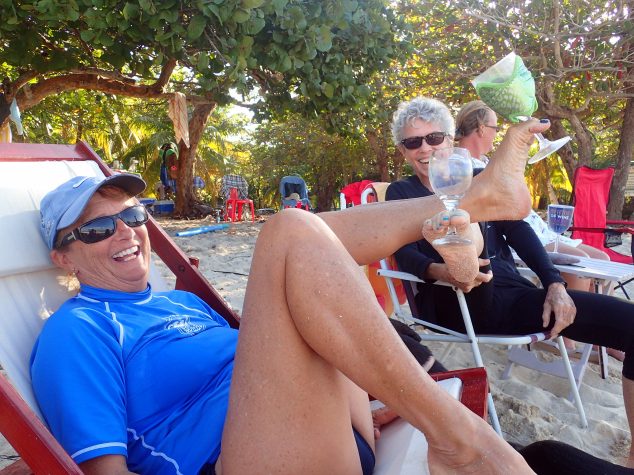 Francie and the Duchess doing their toe thing

Yes, she poured wine on herself. 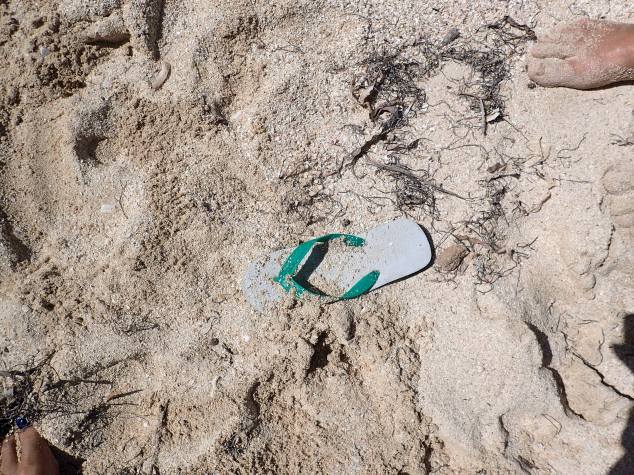 Another lost ZORIE. We thought it may belong to David Groatan but he marks his with a R and an L. 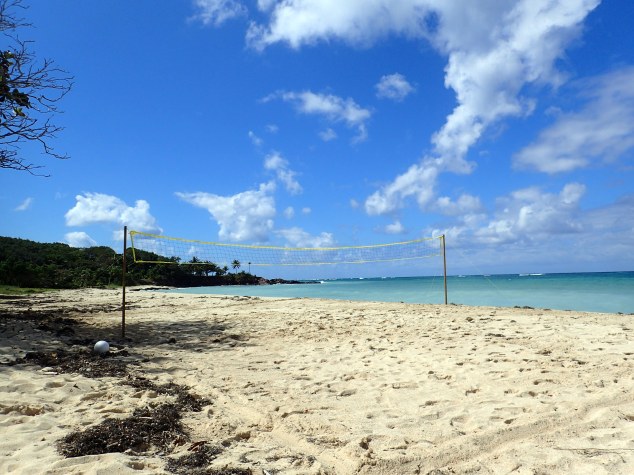 Pity us that we have to play volleyball in such an ugly spot.

Part of the gang..

Wednesday I went to Coxen Hole muni to attempt to pay the property taxes for my friends. The place was packed. Nidia followed up on it and we need more info than I had because it’s their first time paying. We’ll get this figured out yet.. After that I went to my hair gal Nadia to get my roots corrected.

Thursday Carmen and I had a day of fun in the sun planned, however, there was no sun. We went to Mega Paca looking for accessories for the upcoming Pirate party and actually scored some cool stuff. After that we went to Arch’s Iguana Farm and ran into Mr. Arch himself. I also got to meet my friend Gale’s (Sam Arch’s sister) daughter, Derricka. Oh my, what a doll she is. After that I gave Carmen a tour of Parrot Tree, we checked on my friends home for her and then went to Cal’s for garlic bread and wine. It was a wonderful day spent with a good friend! While taking Carmen home we saw an unusual sight and I was fortunate enough to catch up to the guy.

The only way this photo could be better would be if someone was sitting in the rocker.

Friday was the last Spanish class for awhile. After that, it was off to BJs with my newest Mega Paca score, a brand new Woozie (wine glass koozie).

Perfect design and everything..Just be sure to put it on the glass before the wine goes in. 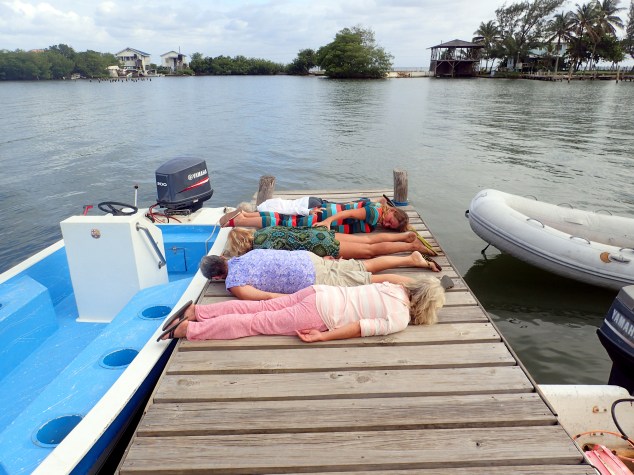 I got the girls to plank again, front to back: Keri, Llyn, me, Marilyn (grabbing my ass) and Jeanie grabbing Marilyn’s ass

Then we posed for a group photo and it looks like I am choking Kathy but I’m not, she’s just being dramatic..

Bill wasn’t working at the house so he planned to come to BJ’s also. When I got out of class Roger said Bill called and there was a dog fight and he got bitten separating the dogs. I didn’t have my phone so I used Rogers to call him back. Apparently Frito got loose and went right for Lola’s throat, for no reason other than hate. In the process of breaking it up, Lola bit him pretty hard on his thumb. I convinced him a beer would make it feel better so he came over for a little while. Frito just hates Lola’s guts because the puppies (Frito’s pups) adore Lola. 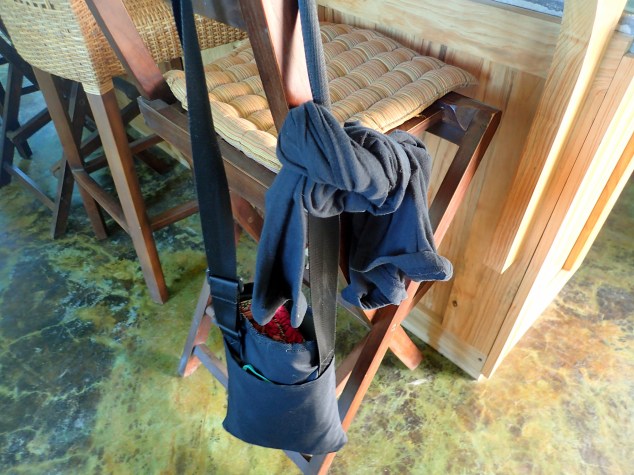 When I left for class it was cool, in the 70’s here. I had on leggings and a short dress/top. Obviously before we planked I was hot because I took these off in the bar and tied them around my bag strap.

When I got home around 3:30 I was so tired I laid down on the couch and slept until 8:30. I woke up, ate yogurt and went to bed. In the morning I was kind of surprised to see my leggings where they were. Oh well, it is what it is.

Saturday I was at the airport until 4:30. The Delta flight was 2 hours late leaving Hotlanta (Atlanta) because the galley oven wouldn’t turn on. What a shame, without it the 5 first class passengers would just have to go without their reheated previously cooked bland nasty food.

Sunday we took the boys swimming @ Parrot Tree again. My new friend from Canada, Diane and her husband Andy are staying there so they walked over to the lagoon and met us. The boys played for about an hour while we chatted. They slowly started to get tired and once they reached the point of groveling in the sand, it was time to leave. 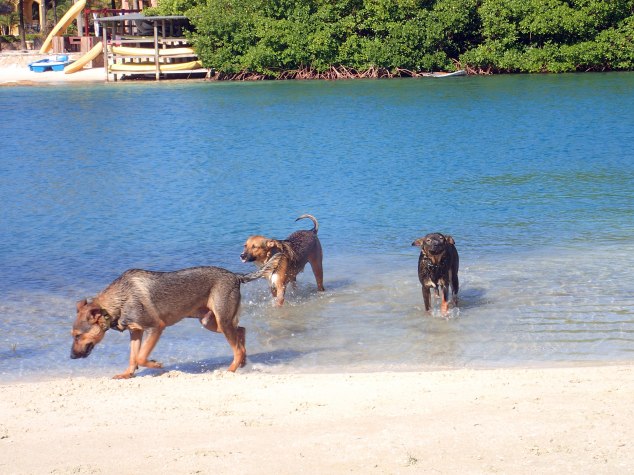 They were really good but still explored every area they could.

So lucky we can take them there to swim. Once Diane and Andy get their home built, it’s beachfront and they said we can bring the boys there to swim too. They are fellow dog lovers.

We came home and I bathed all 3 of the dogs, did some laundry and we all napped for awhile. At 4 we had to meet our friend Miguel in Oak Ridge. We found another bag of soccer jerseys buried in the spare room so we ran them over to him. This is the progress on the Ark disco/casino/nightclub. It’s going to be quite the place. 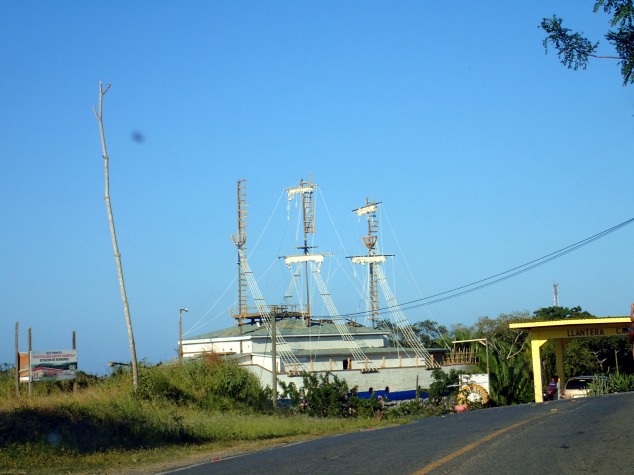 You can see the masts from a distance

They have all the rigging up

They are adding waves and sea creatures 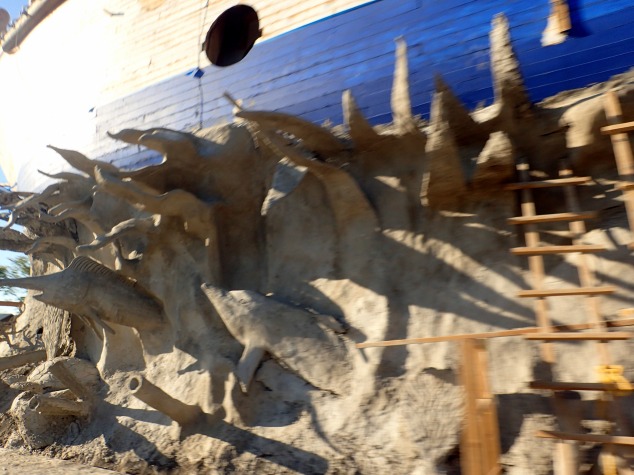 And the obligatory skull. I wonder if I could borrow it for the Pirate party this week??

Last, but certainly not least, my poor 90 year old Mom fell and broke her wrist. She was at the computer, the desk chair is armless w/ wheels and they have a mat under it so it rolls easily. Obviously it rolls too easily and got out from under her. She went down on her wrist and broke it in 2 places. They don’t want to operate so they put her in traction and set and cast it. She’s in a lot of pain right now and her knee is bothering her too. I imagine she wrenched that when she fell. So thankful for my sister who got down there as soon as she could safely drive. Hoping things get better and her wrist heals up quickly.

Next week is action packed; hopefully I am not too tired to blog about it. Being retired and having this much fun every day is hard work..I’m trying like hell not to be boring.

2 thoughts on “The Planking Sisterhood”