01/07/2017 Aside from all the parties for the island kids we did some partying of our own. The evening after our trip to St Helene and the boat fiasco we went to Alex and Marilyn’s home. They live on the water in Calabash Bight, boat access only.

Alex picked us up, along with Franklin, Francie and Sarah @ 4 PM. We stopped by to talk to Brett, who assumed his wife was still with me. He didn’t know Carmen had been home for a few hours. When we pulled up to the Calabash Bight Yacht Club the first thing I saw was a huge mermaid pinata! It was so cool.

We had a few (sic) drinks and some yummy finger food while we waited for the lighted boat parade.

This was the first year for they had the boat parade, there were 7 boats. I hope it grows and people start coming from all over the island to take part in it, I think it could be a really cool holiday attraction for the east end. 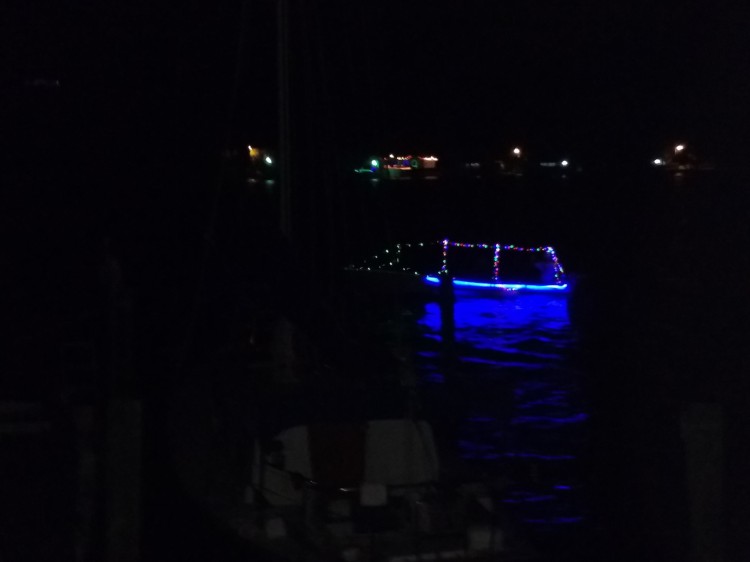 Just as the parade began, my camera battery died. I took a few pics with my cell phone. I just suck at night time photos. The boat parade started in Jonesville and ended in Calabash Bight. We played “Jeremiah was a Bullfrog” loudly, as they motored by. After the show was over and we all had full bellies, we had Alex take us home. It was after 9 and we had 5 starving, frantic dogs.

Friday night we had another party to go to at our friends in First Bight, Linda and Jay. Their home is ahhhmmaazing, I’m always excited when I get to go there. They had a huge spread of food, turkey that was smoked and a big ham along with every side dish you could imagine. The food and the conversation was excellent, such a great group of gringos. Dessert was all fat free, cookies and to die for peanut butter fudge with chocolate topping. OMG and Baileys too. Yep, I didn’t gain an ounce that night for sure.

Saturday I was on the borderline of feeling better and getting sick again. I was coughing a lot and I kept telling myself it would go away. It didn’t. Rather than go to the Christmas party at Ed and Julie’s and cough like a TB patient, we stayed home. I know we missed a great party and I’m pissed but it was the right (polite) choice.

Christmas eve the dogs didn’t want to sleep outside because it was raining, no, it was pouring. Even though they stay dry on the covered porch, I allowed them to sleep on their comfy dog beds in the living room and I curled up on the couch to sleep. (If I don’t sleep in the living room with them, they may eat the couch). Around 2 AM Lola started pacing and barking, I hushed her once but she continued, barking even louder until I was wide awake. When I sat up I smelled something burning, it smelled electrical. A few seconds later I heard snapping and spark like sounds and they were coming from the monitor. I woke Bill and he came out and unplugged the monitor. When he took it apart the next morning that is what he found.

The week between Christmas and New Years was pretty crappy weather for the most part. I putzed around here, had my cleaning girl come and we cleaned upstairs. On Friday Dave and Trish and Natasha, the rum cake queen, came for pizza. Surprisingly, we had a decent evening to eat on the porch.  It’s always nice to visit with the Symons, looking forward to them being here full time in the not to distant future.

New Years eve there was a party out at Mondays Don’t Suck beach but  it’s a 40 minute drive and the road are beyond awful, we decided not to make that trip. I’m pretty sure I was in bed way before midnight. Bill still says NYE is for amateurs.

We went to brunch with a group of friends at one of my favorite places, Barefoot Cay on New Years Day. We reserved the second floor of the restaurant. The view, the ambiance and the service there is stellar. New Years day was gorgeous, sunny and warm. Finally.

When we got home I put on a swimsuit, grabbed a book and crawled on the raft and floated. At various times throughout the afternoon I was joined by one of the boys, they get in, swim a lap or two and get out to lay on a chaise. Yes, they have a terribly rough life.

Dad turns 96 Feb. 17th and Mom will be 91 in August. They are still living on their own but my sister is 5 minutes away. On the day of NY Eve Dad called Missy and said that Mom was having difficulty breathing, she has asthma. Missy had tried to take her to the doctor on Thursday, PJ was down for the weekend and tried to take her Friday, she wouldn’t go, she was fine. Sure she was. They admitted her on Saturday, got her breathing taken care of, started her on IV’s and kept her there for a few days to observe her. She is home now and sounds good. I’ve called nearly every day. When VR answers the phone and realizes it’s me, he says, “oh, you again.” I’m not sure if there is a hidden message in that or not. Not that I really care.

I am headed to the roof with some wine and my camera. Happy New Year to everyone.  I certainly enjoyed ringing in the New Year in my bathing suit, it beats being cold and bundled up anytime.