10/23/2017 The rains are here. It’s been a dreary gray wet week with lots more rain coming. Maybe a little early for the season to begin but we can’t do anything about that so we’ll enjoy the cooler temps and no humidity, even if it means we have 5 dogs underfoot all day long. I believe the nor’easter that was predicted to arrive has arrived. It’s raining sideways, I can’t see the ocean from any window, it’s just total grey, and wet. Damn wet. However, we wouldn’t live in this gorgeous jungle without the rain, so let it pour. The rain is running in both of the bathroom windows, dripping off the counters onto the floor. Damn idiot window guy screwed up 98% of the windows he installed and screwed up 100% of the screens. Good thing he’s a minister and is honest and stands behind his work. Oh wait, no he doesn’t.

Before I left for Maryland to visit with my family I received an email from the husband of a friend that I used to work with. He said he had made something for me and wanted to send it to me in Roatan. Since mail is not easy to get here I suggested he mail it to my sister and I would get it while there.

I met another new friend on FB who wanted to bring flip flops down for Nidia and I to distribute. I sent her a letter to help her get through customs (they think she is going to sell them, well, that’s their claim, anyhow). Denna and Sean and Ben came out one afternoon so we could finally meet and she brought me a bag of flip flops. We sat and talked for quite awhile, all the time Ben was entertaining the dogs. They were fascinated with him, perhaps because he was crawling on all 4’s on the pool deck had something to do with their intrigue.

The day before Denna and the family left for the states, she messaged me that she found another bag of flip flops that they brought for us. I told her I would meet her at the airport and get them. Saturday morning I was getting ready to leave and she messaged and said she was at the airport and everyone wanted sandals. I said, run outside. By the time I got there, it was raining and Denna was hanging out with a few airport workers out of the rain. I pulled up, hugged her, threw the sandals and some leftover beach balls in my car and was outta there. Denna also brought me a gift: this fabulous set of wooden bowls. I am in love with them (and I also am very fond of the burlap bag the bowls came in, which means it doesn’t take much to excite me). 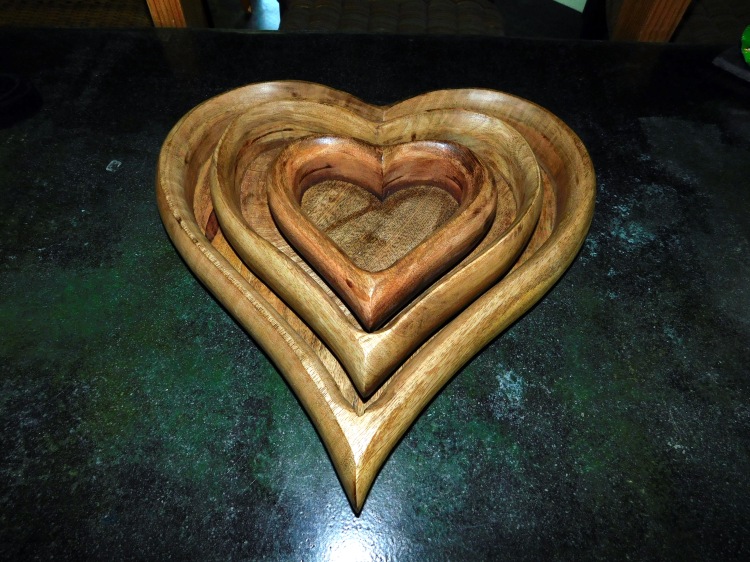 Thank you Denna for thinking of me.

And while I’m at it, thanks to my SIL Kathy for the mermaid pillow. I sleep with it, it is my reading in bed go to, never leaves it’s position. Thank you.

In the world of I still hate to cook, we (Bill) got an instant pot. I won’t even turn on the gas oven let alone read a manual for an instant pot. I thought it may satisfy his need to eat syndrome. Ta-da! We have one and I have been pinning recipes, which I print and hand to Bill. I just pinned a hard boiled egg recipe for the IP but it was too confusing. I put them in a pan with water in it, supposed to be until they boil, but I forgot about them and started doing something else, then remembered. Oh shit. Reason # 327 why I ALWAYS need to use a timer. The eggs survived.

One day a few weeks ago Bill calls me with another, guess what call. Who the hell has a guess, this IS Roatan after all. He tells me that “someone” threw 3 puppies out on the road and he picked them up and they were at Miguel’s. A few days later I went down to see the puppies. One white, 2 tan females. Adorable, and covered with fleas and ticks. They all got thorough Dawn blue soap baths, let them dry, rinsed them and combed all the dead and any live fleas out of all of them. I also pulled all the ticks off of them and squashed them until they squirted blood between my fingernails. They need to die. The pups ears were a mess so I cleaned them, need to go do it again. They are so sweet. They are now flea free, are eating dog food with baby cereal supplement. That way they will get some extra vitamins.

My friend Kathy decided she would take one of the puppies, her dogs are getting old so she took the white one. The pup slept with her the first night, I think they’ve bonded. The pups are ready for their second set of shots and I’m re-worming them next week. Hope to find homes, we and friends will pay for the spaying. They MUST be spayed. Puppies anyone?

Miguel finally was able to get our tile grouted on the pergola counter top, one more thing finished. Bill has decided to redo the steps down to the pool, they were done incorrectly the first time, then done incorrectly the second time. I’m hoping the third time’s a charm.

Last Thursday morning Bill came in the bedroom with Gringo and said, we have a problem. Bill is a harbinger of gloom and doom, honest, he is. I was still asleep. He got Gringo up on the bed and pulled his tail away from his butt and there was a sore big as a 50 cent piece. Inside the raw wound was a hole. Not just a little hole but a hole that looked like a groundhog lived in it or something. There isn’t a vet on the island until Wednesday. I was going to take him to the mainland to be seen but decided since he wasn’t sick from this injury that I could wait for Doc. I started him on antibiotics right away and used Vetricyn spray on the wound. We wrapped it during the day and at night took the bandage off and had him wear the cone. I wanted to keep the wound as clean as possible. It was actually looking better after a few days. We asked Miguel to go with us to the vet on Wednesday to translate since Bethany (who usually translates) doesn’t come in until 8, we were there at 6:25 AM. We got him up on the table and Doc examined it, gave him a shot to knock him out and we waited. Finally he was stoned enough for Doc to start working.

Doc cut some skin from the edges, cleaned out the hole thoroughly, debrided the whole wound and then put stitches inside and outside. Doing this is genius, it’s the way vets in the US do it because it doesn’t allow a pocket of blood to form between the wound and the stitches. Doc said he will be fine, keep him on antibiotics, take the bandage off in 3 days and come back in 2 weeks. We were there for 45 minutes, 30 of those minutes he was tending to Gringo. He gave him a shot to knock him out and one for pain and charged me 750L which is about $31.00. We are so lucky to have a surgeon of his calibre come to the island. When Doc removed Fritos leg, it was the cleanest incision I’ve ever seen. There was never a bump or a red spot on it. The guy knows what he’s doing and his compassion for animals is overwhelming.

Gringo got his bandage off on Saturday, finished his antibiotics yesterday and his tail incision looks fabulous. Unfortunately, he won’t stop chewing at it so he is in the cone most of the time.

On Wednesday afternoon I heard Highway barking like crazy (not unusual since he’s an idiot) so I went out to see why. These boys were outside our fence, they live down in the valley and cut wood nearby. Milton was calling for me, he needed water because David had cut his foot. Bill walked around the fence and carried David to the porch. Bill cleaned the wound and bandaged it. I gave them all sandals and small balls from Denna, underwear from Kelly and Hot Wheel cars from Mike and Liza. After that Bill took them all home. Seriously, kids this young cutting wood in the jungle in their bare feet, it’s life down here. People do what they need to to provide for their families. This is the norm for island life.

We have eaten at Aroma twice in the last few weeks with Trish and Dave, always an enjoyable time with them and the food is delicious. We also had dinner and visited with our friends who have one of our pups, Tank or Tankerdoodles as I called him. Oh how I love all of these dogs that Frito had.

Chance and the family are coming in June, can’t wait for them to visit again! He found some good prices on tickets considering he is coming from Rapid City.

The following are some of Trace’s doodles. They can all be purchased here: https://traceplace.pixieset.com/art/

He also has larger pieces available at: https://traceplace.pixieset.com/largerart/

My friend ordered some via the site, said it was very easy and they were delivered in a week. He calls them doodles, I call them amazing art. 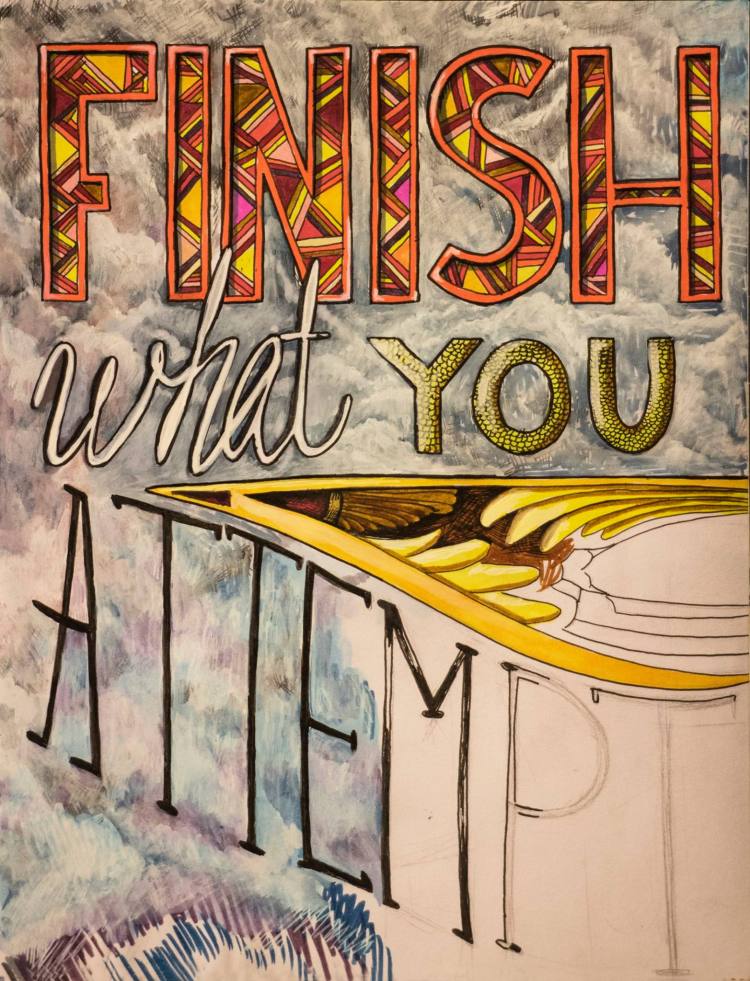 We got our furniture back from the upholsterer, it looks fabulous, although it is sitting in the middle of the room covered in sheets. I want to re-arrange the furniture but need to get Bill on board to even attempt it. Once we get it situated I’ll post photos. I took my old curtains down and gave them away. I don’t want curtains, Bill does, he doesn’t have to wash and iron the stupid things. Waldina’s (the upholstery shop) is recovering the throw pillows for the couch and making 2 covers for the ottomans that the dogs lay on. They will be made out of sunbrella (the whole couch is Sunbrella) so they will be cleanable.

Last week Marcos was cutting with the weed whacker and noticed these five babies in the trees. On Saturday he caught one and he and Bill took it to Arch’s Iguana farm.

It sounds like the rain has stopped for the moment, it may be a good time to take the five dogs out to potty. Bill made some chicken noodle soup in the instant pot tonight. Power is still on, rain has stopped. Could be a good night despite having 5 dogs inside because the porch is totally wet.

By the way, the 26th of October it will be 4 years since we moved here. Four damn years, where did my life go? No regrets. Dinner with a huge group of friends on Friday night, living la vida loca.