1-30-2021 Wow, 2021 and it’s almost February.  How did that even happen? Where did January go? We have not done a whole lot this past month except paint the giant room in the house with 12+ foot ceilings. It’s a foyer, living room, dining room, kitchen, and it’s huge. The house is all one color, silly putty diarrhea brown. I detest it. I wanted to go with a light cream but after we (when I say we, I mean Bill, he doesn’t appreciate me painting) painted the wall around the door we realized it looked terrible with the off-white ceilings. We didn’t want to use a crazy color because we hope to sell this place once the island house sells. Having colors can be a deterrent to a prospective buyer, so we went with a gray. I know, I know, gray is the most overused color right now but it’s clean, calming and looks a hell of a lot better than the silly putty diarrhea color. We (Bill) still has the big hallway to paint and then I would like to do the bedrooms and bath, in other words, the whole damn house. 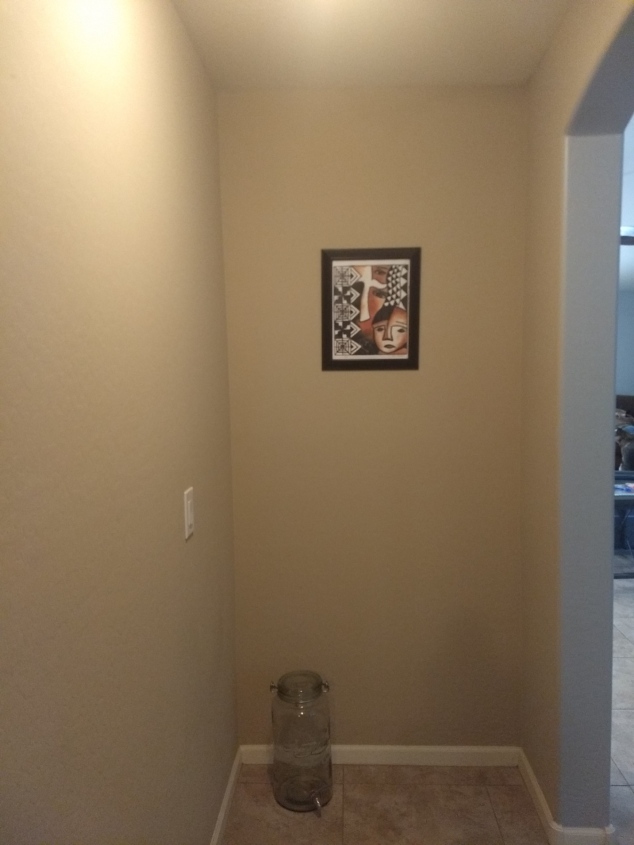 This is the silly putty diarrhea tan color the whole house was painted.

The foyer and the boys with the new paint.

The small hallway back to the master and the laundry room got painted.

Super high ceilings. Luckily we have sun shades on all of the windows, which helps keep the house cool in the summer and warm in the winter. 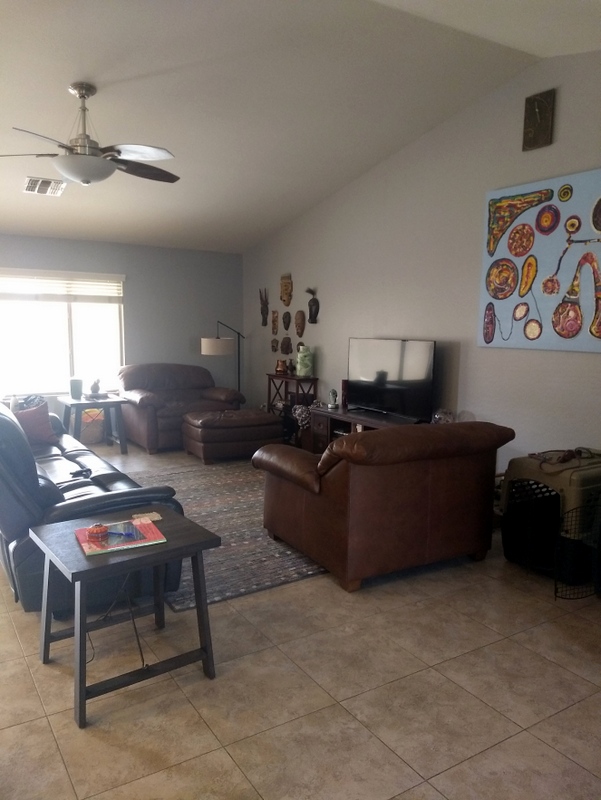 Sorry for the crappy photos, too much light coming into the room, but you get the idea of the size of this room.

We were going to do a tile backsplash but decided we didn’t want to put too much money into a temporary home so we went to Tempe and had a piece of stainless steel cut for the backsplash. The old stove had a back on it which is why there is no granite there. The new stove has controls on the front so we needed to do something for a backsplash. This works for me.

We bought a big shelf to use in the laundry room for all the small appliances, Kitchen Aid mixer, Cuisinart, Instant Pot, Crock Pot, etc so it was time for me to do my most favorite thing. Organize. Once I got the laundry room all finished I started on the pantry. I pulled everything out and organized it. Once I had it all put back together, I realized the pantry was never painted. (Bill doesn’t like painting in closets, he thinks it’s stupid, I disagree). I pulled everything out again and had him take the shelves out. I scrubbed the wire shelves and then started painting. There was a real mess on the counters with all of the pantry stuff stacked up until it was dry enough to put stuff back in it. I swear it’s the smallest pantry in the universe, WTH were they thinking?

All organized and Barrio gives his seal of approval.

Bill’s crates arrived early January, all 5 of them. He opened a few and got out the art and the rest of the house stuff that I packed but couldn’t fit in the crates we shipped when I moved.

Unloading from the freight company.

OK, so now where do we put all of this stuff?

The garage has been a semi disaster since the crates arrived. He recently began building cupboards to put some of the things away. Hopefully, there will be some order in there soon as it really messes with my OCD.

We have had some cold and windy days recently. Dog walks in the morning are sometimes downright cold, although I’ve only worn gloves once or twice. The other day it was starting to rain while I was walking so I revved up to Mach 2 and made it home before the clouds burst open.

I love the windy chilly mornings, they are invigorating.

The other day it was raining sideways, then sleeted, then we actually had some hail.

They had snow in the higher elevations.

My friend, who I have never met but know we would get along like long lost buddies, sent me a card for my birthday. Wrapped around the card was a Mermaid tiara. I love it, I often wear it while sitting on my computer. It makes me feel cool. Thank you Sue!

Yep, one of a kind. Maybe I should wear it to walk the dogs.

Many years ago Olivia gave me these birds on a wire. The birds have big paperclips on them. I used it in Washington and took it to the island but never used it there. Since I have set up my scrapbook stuff and computer in the extra bedroom, I found it again and put it up. It’s well-traveled.

I managed to nicely slice my pointer finger on the sharpest bread knife known to man. It bled for a long time. I was sure I needed stitches but Bill said not. He hates me. 10 days later and I’m still wearing a band-aid and when I bump it I wince in pain.

Speaking of pain, we were taking the dogs to Valley Humane Society to get micro-chipped. We loaded all four of them in the back of the car and started on our way. Not far from the house Highway started his damn high pitched whining and crying. He would NOT stop, this is not the first time he has done this. I grabbed him and tried to get him to shut up but he just howled longer and louder. In the process, my finger started bleeding again, 3 days after the cut. I keep the dogs tethered on leashes in the back of the car. I’m afraid if there were an accident they would get out and run away. With Highway howling the boys were all stressed out, Max’s leg was wrapped with someone else’s leash, it was insane. (I now have 4 short leashes so less chance of them getting tangled, they just have to stay where they are.) I had Bill turn around so he could take Highway home, I couldn’t take it. I dropped him at the mailboxes with the screeching idiot, I untangled Max and then took the boys to get chipped. The lady who took them back to get the chips remarked how well behaved they were. I’m happy to have the boys chipped, you just never know. 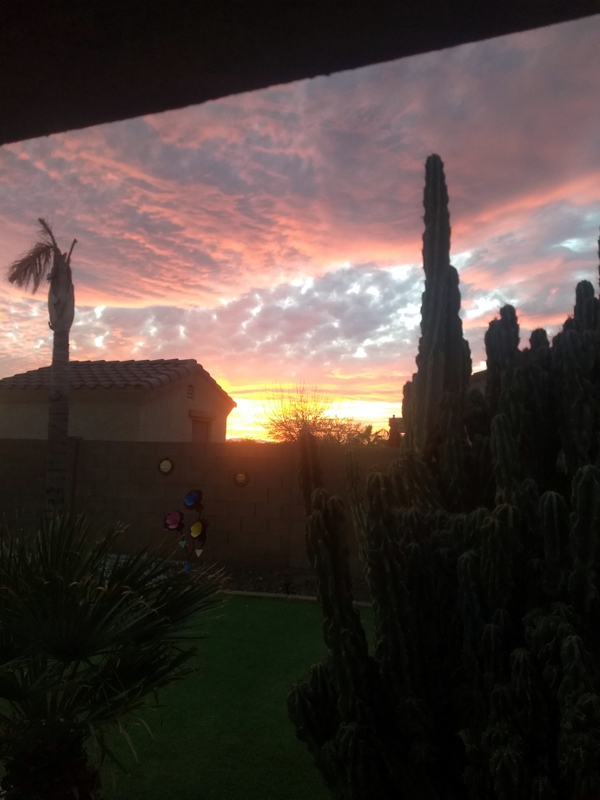 We do get some pretty skies here, sunset is better a block up the road where there are no houses.

This Queen Palm was dead when I moved in here. After I had the drip irrigation installed 3 more died. This one Bill was able to push over. Now we need to get it cut up and disposed of. Still not sure what happened to the Queen Palms. I read that there was a problem with the drought conditions in Arizona and many of them were dying. However, I had new drip irrigation put in and it was working. My friends’ husband was a landscaper and he said they can get a disease in the top of the tree from bird poop. This makes more sense because the tops of the trees kind of rotted.

The other day I was reading Fakebook while I had a cup of tea, pre dog walk. Someone posted that there were 2 pitbulls loose in the neighborhood. This made me really nervous because my friend and his dogs were attacked by 2 pitties a few months ago. There are leash laws in Arizona, people are NOT allowed to let their dogs run loose. I was nervous even though I have a walking stick with a taser on the end. I had Bill walk Highway first then I walked Barrio and he walked Max and Gringo with Barrio and me. Normally we don’t walk together because the ones not walking with me cry and whine and jump up because they want to be with me. This is still the case. We didn’t see any loose Pitbulls, luckily. I wish the people who see them would call animal control BEFORE they post it on Fakebook. Posting there does no good, especially when you don’t even say what part of the development you saw them.

This is in the park where the sidewalks are wide enough for them to walk together. Max on top, Gringo in the middle and Barrio at the bottom. Where we go one, we go all. 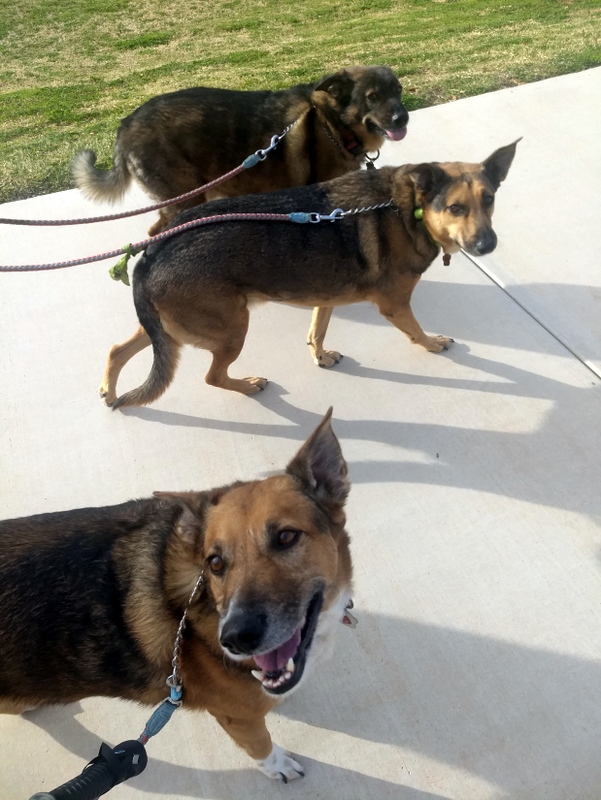 Smiling for the camera. I love these dogs so much!

Since I went way overboard with dog toys for Christmas, it seems all I do is pick them up off the floor. The usual count is 13, although it has gotten up to 21 a few times. No sooner do I put them away than someone decides they need the toy at the bottom of the toy box.

I have changed my mind and am NOT have the surgery to repair the ruptured ankle tendon. I just can’t stand the thought of not being able to walk for 2 months. I went to the foot doctor on Thursday and discussed it with him. He said that it for sure will not heal itself due to the nature of the rupture. It didn’t tear in half, it split in the middle. To repair it he has 2 choices and would not know which he was going to do until he got in there. One is to cut the tendon away on one side of the hole, that is if the remaining piece looks good, otherwise, he sews up the hole in the center, repairing the tendon and keeping it whole. He said it more than likely will not get any worse and it definitely will not get any better. I’m just going to go with it as it is and deal with the discomfort as opposed to being immobile for 2 months. He suggested I wear the torture device he made for my ankle. I laughed and told him that it will never be on my foot again. Pretty sure he wishes I would find a new foot doctor.

It’s really sunny out again today, it’s supposed to be in the 70’s next week. I’m sure that does not indicate that spring is on the way as February is usually a cold and windy month. We have had more rain in the last 10 days than we had all of 2020. It’s not bad enough having 4 big slobbery messy drinking dogs, now with the wet ground my floors are a mess. I have 2 large towels in front of the door hoping it will catch some dirt off of the 16 paws as they enter the house 10+ times a day. I should probably scrub the floors again but really, why bother?

I’m going to go make a cup of chai and read for a while, hopefully, I can stay awake. Happy February everyone!

6 thoughts on “Winter in the desert.”