10/26/2015  Two years ago today we arrived in Roatan with 2 dogs, a cat, 5 suitcases and 3 carry-ons, making one of the biggest life changes ever for us. It was a big move, mentally, emotionally and spiritually. I’ve learned a lot living here for 2 full years and I can honestly say I love Roatan. I love the people I have met, the Ex-pats and the Islanders. Now that the house is completely livable and the pups are rather self sufficient I’ve been able to really get involved with many different groups and doing that has given me the access to meet some fabulously wonderful people.

Earlier in the week we had another delivery truck stuck in the driveway. I “think” this is # 10. I could smell the clutch burning up before I even knew there was a truck down there. They were bringing building supplies to people living down in the valley and had too much weight and poor brakes {a very common problem on the island, we don’t need no stinking brakes}. They reach a point where their load is too much and the no brakes/poorly maintained vehicle issues rears it’s ugly head. They tried and tried to make it but in the end they chose slamming into the bank instead of dropping off into the ravine. Bill had been out running errands and came along while they were figuring out what the hell to do. They actually pulled the truck out with a chain hoist, which is usually used to move engines. Not trucks. (Bill had previously told me they used a come-a-long, that’s why I posted that on FB). It worked and they somehow managed to get backed down the driveway. It amazes me the condition of the vehicles on the island, bald tires, no brakes, bad clutch, insanely crazy alignment where the trucks actually look like they are going down the road sideways.

The bank eats another truck

Friday afternoon we again went to BJ’s to see our friends. It’s a great way to begin the weekend and make plans for the upcoming week. After we left BJ’s we came home, grabbed my car and headed to the grocery store. Grocery shopping after a few drinks is never a good thing.

This is the only one of three I could post. In the other 2 photos I clearly was, whatever. Thank you lovely Marilyn. I forgot that you took these but when I saw them on my phone I remembered you asking how to do the camera. So I did remember. I am with a friend, Kelly.

I worked at the airport again on Saturday, 5 weeks in a row. On the way in I saw my friends Rob and Lisa. They have 2 of our puppies, Bandit and Sable. Sable was the only girl in the litter. Sable had been having some eye problems and one of the numb nuts in the pharmacy gave them some eye drops which they said would be fine. Not knowing, they used them in Sables eyes. They were steroid drops and sort of ulcerated her corneas. Rob was flying her to La Ceiba to Dr. Bueno’s animal hospital. When I saw that sweet little girl, she knew who I was right away and gave me so much loving while I stood there crying. Her eyes hurt her so badly she kept them closed. Lisa said she is still at the hospital, waiting on some more tests but they said her eyes were open and she seemed to be doing better. I am very anxious for her to heal and come home. Please keep Sable in your prayers. I cried the whole way home from the airport just thinking about her.

The airport, I do love being at the airport. I have so much fun meeting people.  This week as I meandered  through the lines chatting to people a man said to me, “Good thing you don’t have a problem with shyness.” Nope. Not me. Several of my friends arrived this weekend, either coming back home or coming for a few months or for a vacation, it was so fun to welcome them with a big hug. I even met some people who remembered me from when they were here a few months ago. The flights were all screwed up with arrival times, from what we were told, all 3 would land within 15 minutes of each other. Delta surprised us and landed 35 minutes early, then American and United landed within 15 min of each other. Craziness. We kept it under control and got everyone through immigration and in a good mood to start their vacation. Carolyn and I seriously think we should be serving cocktails in Immigration.

Sunday we (I) made a huge mistake and decided to take 5 of the dogs swimming to Paya Bay. Highway whined the whole 25 minute drive there, he’s ADHD and can’t control himself. You could cut his lips off with a chainsaw and he would still whine. Physically, he can not stop. The boys were in the front and in the back, changing seats every time we hit a bump, which was every 5 seconds. Lola was terrified, she does not like cars. Or water. Or food. Or us. When we got there the first thing we saw were 2 stray dogs on the beach. SHIT. There weren’t supposed to be dogs, just sand and garbage. Lots of trash on this beach. . They did run off when we parked so we let the herd loose with leashes still attached so we could grab them easier. They weren’t interested in the water, they wanted to run. Then the other dogs came back and my fear was the boys would chase those dogs and we would never find Barrio, Gringo or Maxillicious again, so we left. It was a piss poor trip.

5 dogs in the backseat

After we came home, it was still early so I crawled back in bed with Emmy {after I bathed the 3 pups}. I slept until 11:40, it was a nice sleep, kind of light and dreamy.  We got ready to go to our friends home for a late lunch. They live on Calabash Bight (Bay). When I say on, I mean ON. Alex picked us up by boat from BJ’s and we were at their place in 5 short minutes. I always love riding through Pandy town on a boat and waving to the people along the way. We hung out for a while on their superb deck talking, having some wine and enjoying the view. Marilyn made a delicious Caesar salad with home made croutons and home made dressing. I could have made a meal out of that. She also had chicken for the 2 of us (I don’t eat red meat) and steak for Bill and Alex and a great potato casserole. Yummy 5 ***** meal in a beautiful location with great friends, doesn’t get much better.

Yes, I know, their view is kind of sucky. Especially when the sun is setting and the moon is out. The colors are very defined. The huge blue house in the background on the hill is my friend Kathy’s home.

South west edge of the mouth of Calabash Bight.

A better view of Kathy’s. She just painted her roof, it was darker before. I like it.

Skipper. What a love. Skipper and Scruffy and the neighbor dog that thinks it lives there. 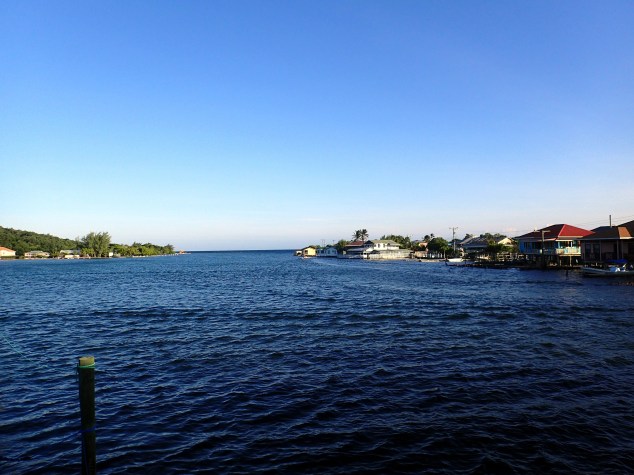 The mouth of the bight.

What a glorious moon.

How do I caption this? Perfection?? 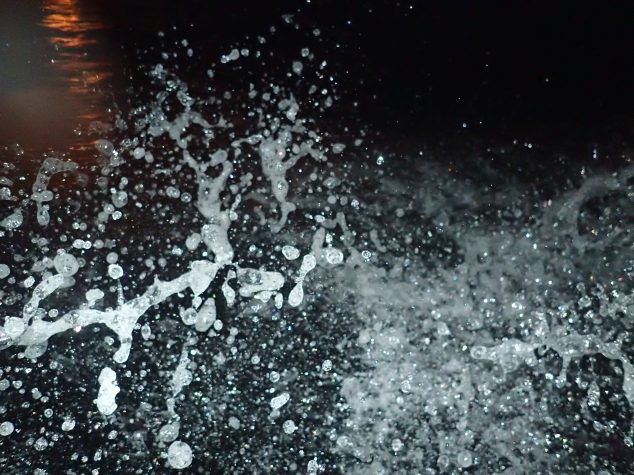 Water splashing, love sticking my camera off the side of the boat and snapping away. Good lord, I love digital photography.

Pulling in to BJ’s to begin our drive home.

The dogs were all wild and crazy when we got home. Frito was doing her damn seal thing. I can’t believe Bill doesn’t think she sounds like a damn seal. It drives me up the wall. A few glasses of wine in the afternoon and I fade F A S T. I was in bed early.

This morning I had to meet our friend Sam to give him money to get the fiber glass to start doing our roof. It’s flat and we thought it would be a good idea for water damage prevention. The roof will be like the deck of a boat, non slippery and it won’t mold or mildew. I pulled into the Iguana Farm and parked my car. As soon as I began walking down the ramp, I looked at all the iguanas and said to myself, ” Do I have a cool life or what? Walking through the iguanas to meet my friend Sam.”  Yes, blessed indeed, especially to have Sam as a friend. Sam showed me his new boat and his fiancee’s house that he is building for her, all the while there are iguanas wandering everywhere. So darn awesome! After that I ran to ACE  and grabbed a few glow sticks for tomorrow night, knowing full well with the full moon at the Daughters of the Island Moon party, that I probably won’t need them. The party is on the beach at a very secluded place, so looking forward to a night with some crazy island sisters.

So yeah, 2 years here on the rock. Did we make a mistake moving here? I don’t think so. Our life is so different from what it was 2 years ago. When we first moved here we knew some people and got to do some fun things but the longer you are here, the more people you meet. Whether it’s in the process of finding homes for our puppies, meeting people on FB and then becoming friends once they get here, handing out TOM’s shoes, delivering desks, helping at Cattleya, volunteering for Because We Care or at the airport, the people I have met are fascinating. They are all different, come from different ways of life, live differently at home and here, had different former lives, have different points of view. However, the one thing they all have in common is: THEY CHOSE THIS ISLAND TO CALL HOME. It’s an unspoken bond. Island Insanity. We all have it.

I have loved my last two years on this rock and am pretty much ready for whatever comes next. No hurry. It’s called Island Time.