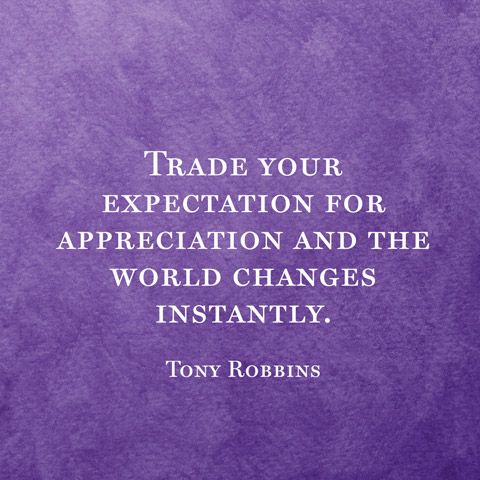 06/05/2016 Between getting my house ready for company and helping to host the East End Senior luncheon, time has flown by. The last I blogged was before my company came, May 19th. I have been busy entertaining and having fun with Teri and Olivia, I’ll fill you in on that in another blog or two.

The senior luncheon was held at Turquoise Bay on the 18th of May. It was a glorious sunny (hot) day with a nice breeze on the beach. I couldn’t go as early as I wanted to because Bill had to run errands and I had to stay here until he returned so the dogs didn’t harass the worker guys. I got there around 10:30. The tents and tables were all set up and I was amazed, there was already a group of people there from Helene. The party didn’t start until 2 but they were there before I arrived. When you boat from Helene you want to give yourself enough time to arrive.

The seniors were being driven right out on the beach so they didn’t have far to walk in the blazing sun on the steaming sand.

It was a beautiful venue 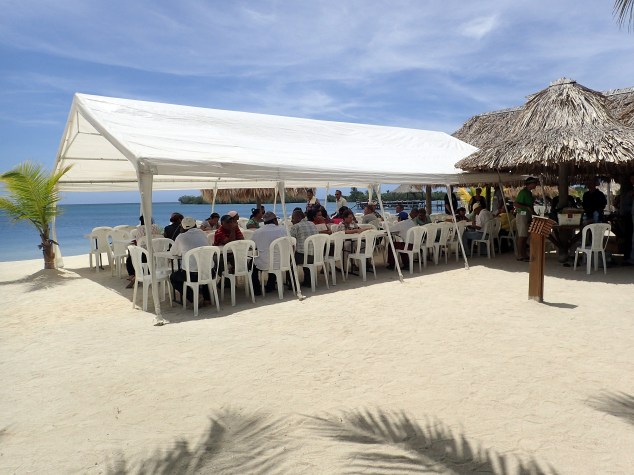 Trying to keep everyone in the shade

The food was not scheduled to be served until 2 PM and the staff at Turquoise Bay was preparing all of it. They brought the cake out quite early and I was sure it was going to melt but it didn’t, it stayed nice and chocolately and yummy looking. 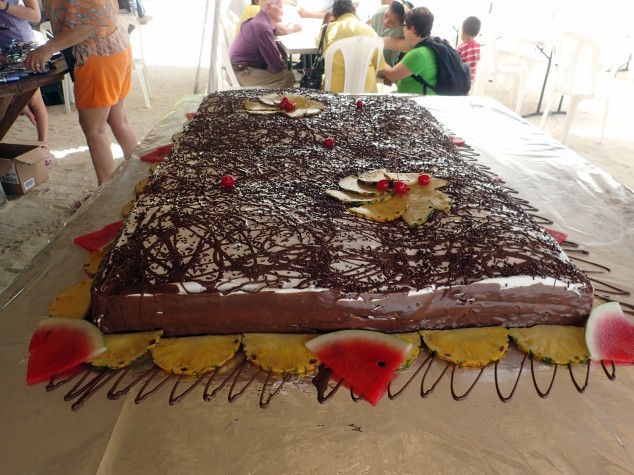 It was so big they brought it on a sheet of plywood.

The Live Again Ministries provided financial support and helpers for this event, as they did last year. They brought hand fans for everyone, nice handkerchiefs for the men, a colorful assortment of wash cloths for the ladies, bracelets that said Live Again Ministries on them and small key chains. We had many pairs of reading glasses donated by Jan Walkeden and Trish Nixon and friends, thank you for those also, they were a huge hit!

Many thanks to all of my friends here on the island and in the states who donated money to buy the food baskets. We were hoping to get enough $$ for 25 baskets and ended up with enough for 32 so we raffled off the extra ones and made several people happy.

A vast array of colored washcloths

All the pretty baskets lined up in a row.

Pastor Ronny Russell of Live Again Ministries helping to pass out baskets. This is the second year in a row this group has been instrumental in helping Because We Care make this luncheon happen.

Daine’s granddaughter learning about giving to the elders. She was a great help. 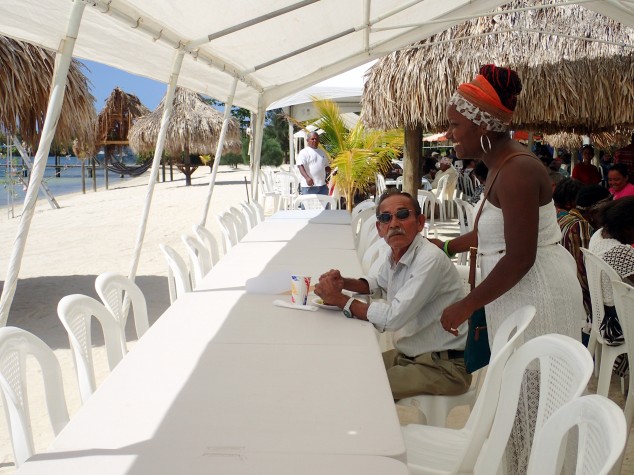 I was worried that this gentleman was sitting alone. Nidia went up and talked to him and he was enjoying the view and waiting for his buddies. 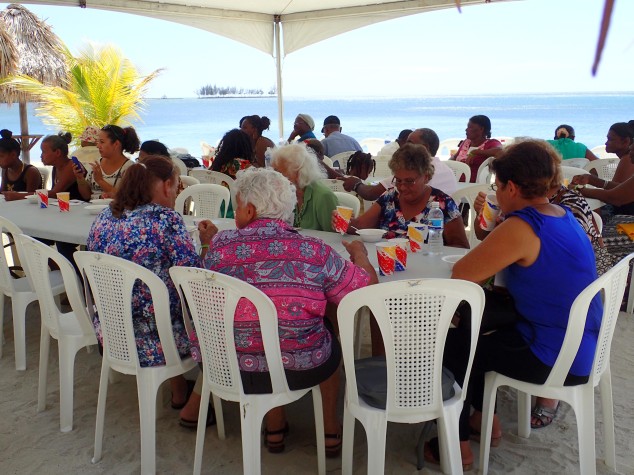 So nice for these people to be together and have time to chat and catch up.

Auntie Clara in the pink. She is 100. I went to her 100th birthday party last year. Across from her is Miss Catherine Wood. She turned 90 the 23rd of May. Her daughter Daine is a friend of mine. Miss Catherine is an island gem. 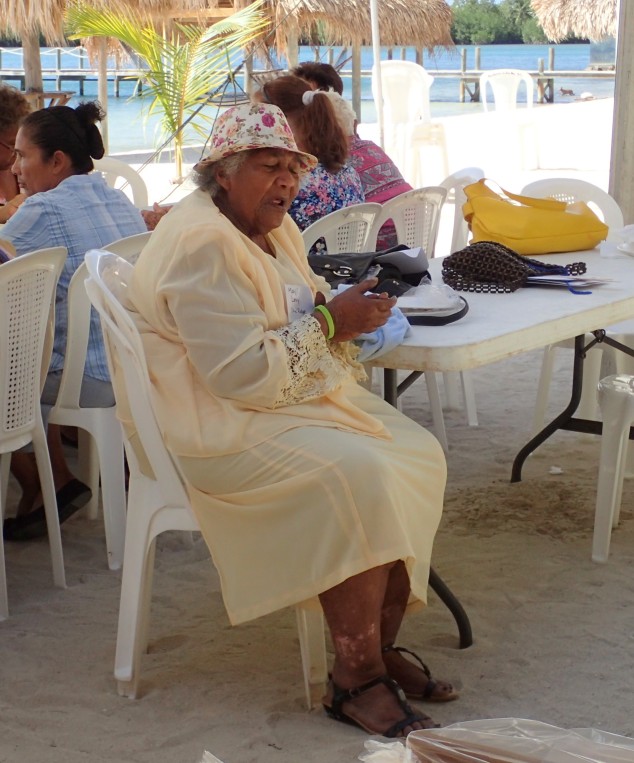 This sweet lady was so into the music she was clapping and moving to the beat. 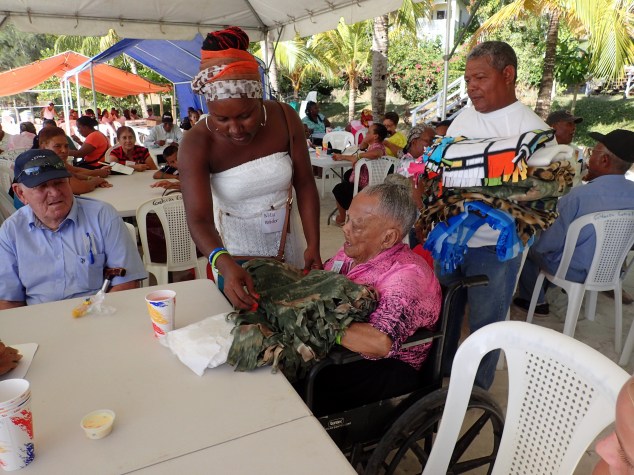 Nidia giving Auntie Clara a lightweight fleece blanket made by the industrious ladies on Brass Hill. 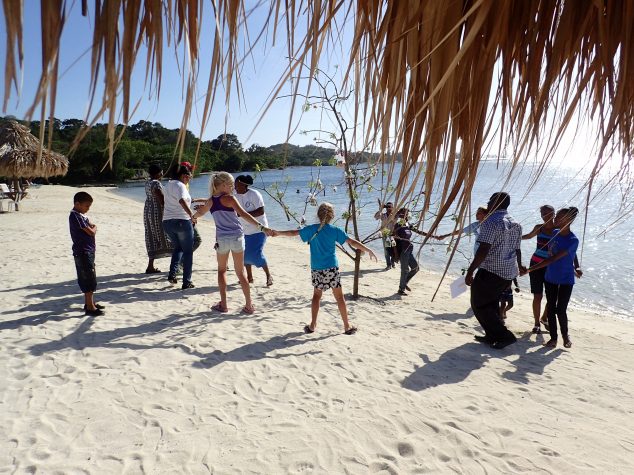 After the people had eaten they did a traditional “maypole” using a tree. There were assorted fruits tied to the tree branches and everyone danced around the tree. They took turns getting in the circle and dancing.

So much fun, music was supplied by Jimmy Connor, but he was in this circle dancing.

Jimmy is the guy on the left with his arm up.

Then the music stopped and someone yelled Rob the Tree and everyone ran and pulled the treats off of the tree.

One of the men with his new handkerchief.

My sweet friend Carly helping to pass them out.

No cake left, it was delicious.

This lady was leaving and even though she had a cane she was dancing to the music as she passed the band. 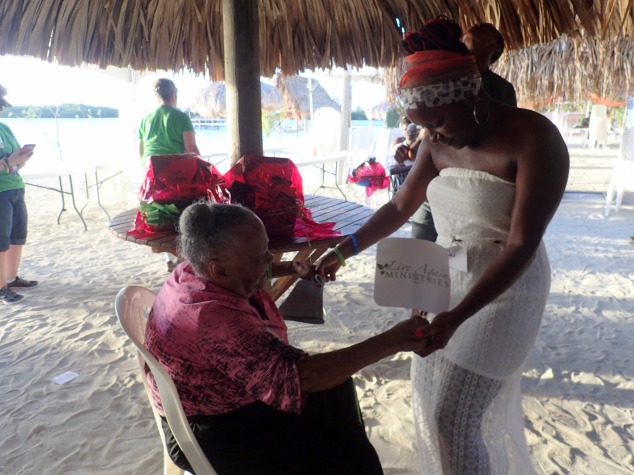 Nidia getting Auntie Clara in the swing of things.

Then there was the clean up.

Many thanks to those who donated:

I really wish you all could have been there to experience these amazing people. I get so much more out of these events than the people who they are for. This is a big social event for the island elders, they only get to see the people who live in their communities every now and then. For them to get to see relatives and friends they haven’t seen for years, it’s a big deal. It makes me realize how much we all take for granted, the ability to hop in your car and go see a friend, or to have lunch with a group of friends. This is not in their realm. They don’t have transportation nor the money to go and do these things. There is no Social Security for you when you retire, you’re on your own. It’s the main reason one of these events is so important, just acknowledging that we know they are there and that we care enough to bring them together, to raise money for gifts and to have people like the Live Again Ministries be there for us at each and every step of the way.

Would any of this happen without Nidia? She has the biggest heart on this island and in the few years I’ve known her I have seen her bring smiles to so many people, just doing little things and letting them know she cares. Sometimes it’s the little things that mean the most..