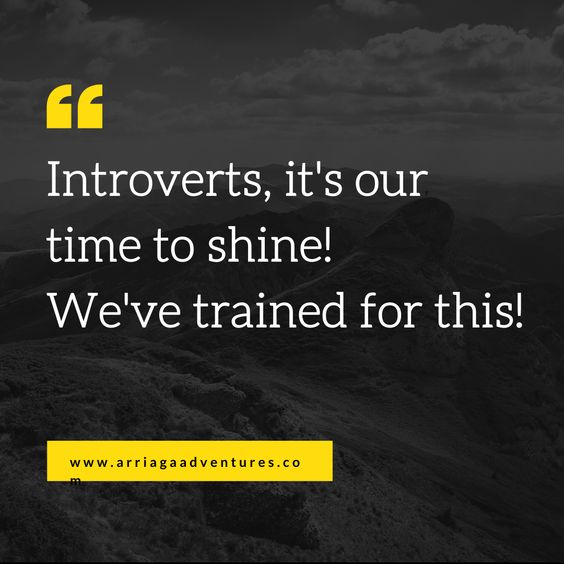 03/20/2020 I am not going to say I’m practicing social distancing because I have it mastered already. I do not like crowds or large groups of people. This is not new, it’s my normal. The older I get the more I realize I don’t have a need to be with a lot of people, I chose who I want to be with rather than be thrust in a group of 20-30 or more people that I really don’t know or care to know. I have a few years left in my life and only want to spend it with the people I like, not once a week or once a month friends. I have no need for that.

Bill was here for 10 days, I told the dogs he was coming but all they heard was blah blah blah. I took Max to pick him up in Phoenix. Max was super excited. When we got home I had Bill let the other two out of their crates and they went batshit crazy. He sat down on the chair and was totally mauled. Gringo even added the special loving touch and humped his shoe.

He got all of the Honey-Do list done which was fabulous. He: put the dresser together, put the trundle bed together, fixed the lights, took down the saltwater pool box, hung 2 huge Cool-a-roo curtains, figured out the accent night lights in the yard, added new timers to them and to the filter. Moved the desk which weighs 11 tons, hooked up the batteries for the electric couch since we have no outlet close by. He moved the washer and dryer out so I could scrub under them and replaced the guts in the master bath toilet and added some RAM to my slow laptop. 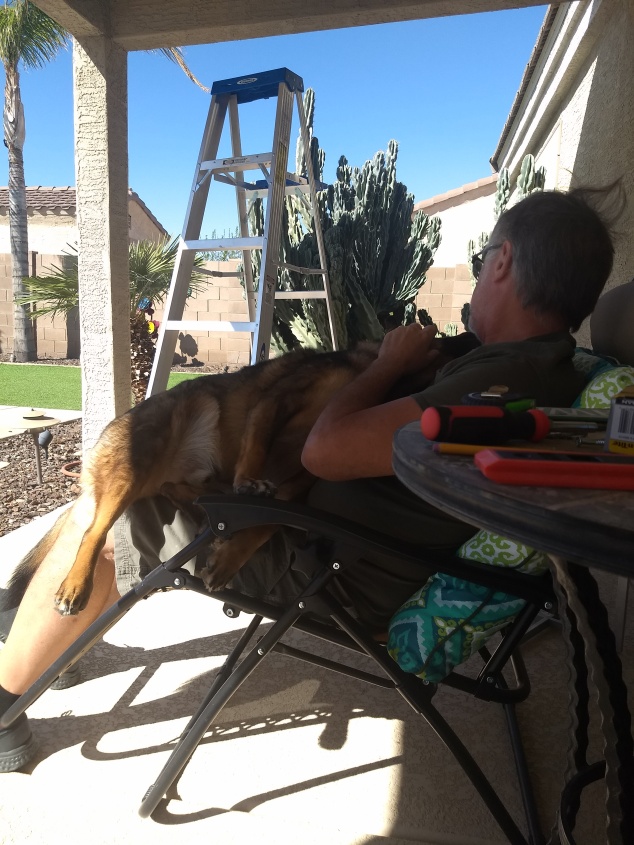 Dog loving while hanging the blinds. 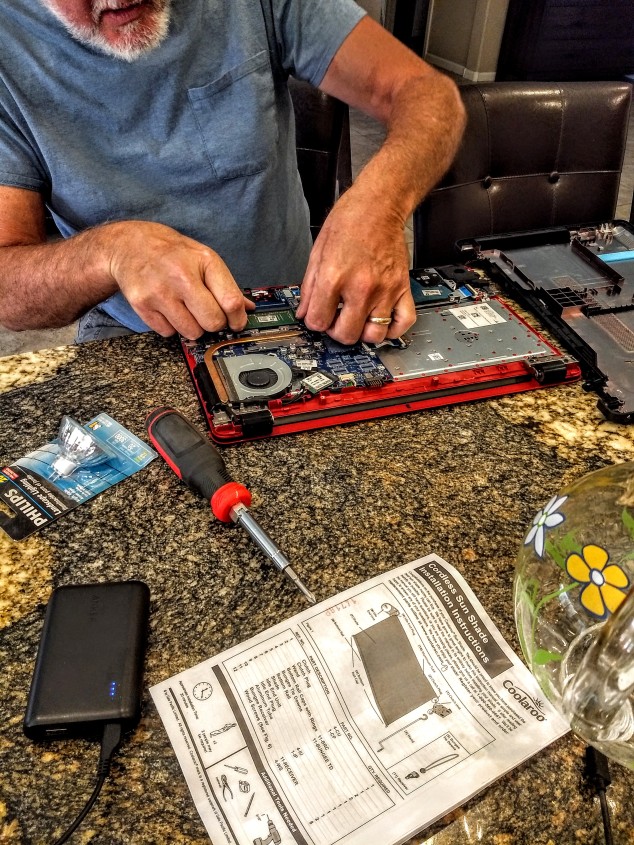 This made my computer so much better, it was booting up so slow I hardly used it.

I found a local nursery online that wasn’t far from the house so we went one afternoon. It was huge but it was also a mess. There was trash everywhere, broken pots floating in with the koi, totally overgrown with weeds, buildings falling down, I was not impressed. Most of the cactus looked good but the other stuff was pretty much dead. They did have some interesting things laying around but I didn’t buy anything. Doubt I will return, I can’t stand places like that. 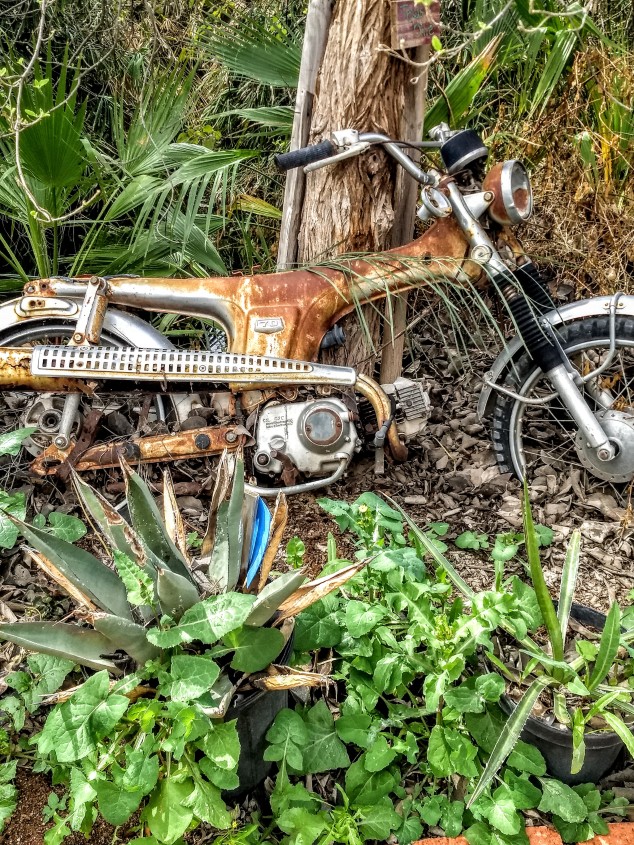 Becoming part of the landscape 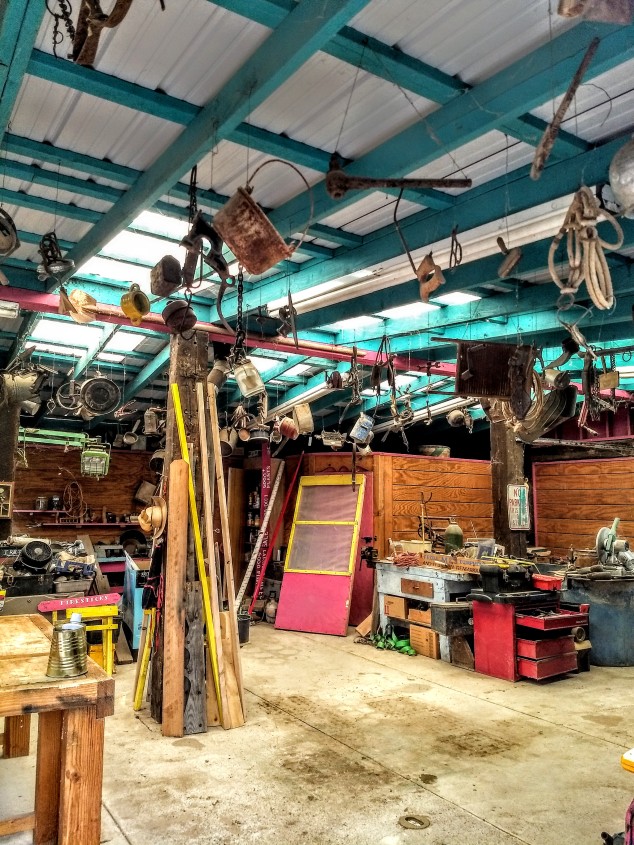 This was the cleanest building that we saw. 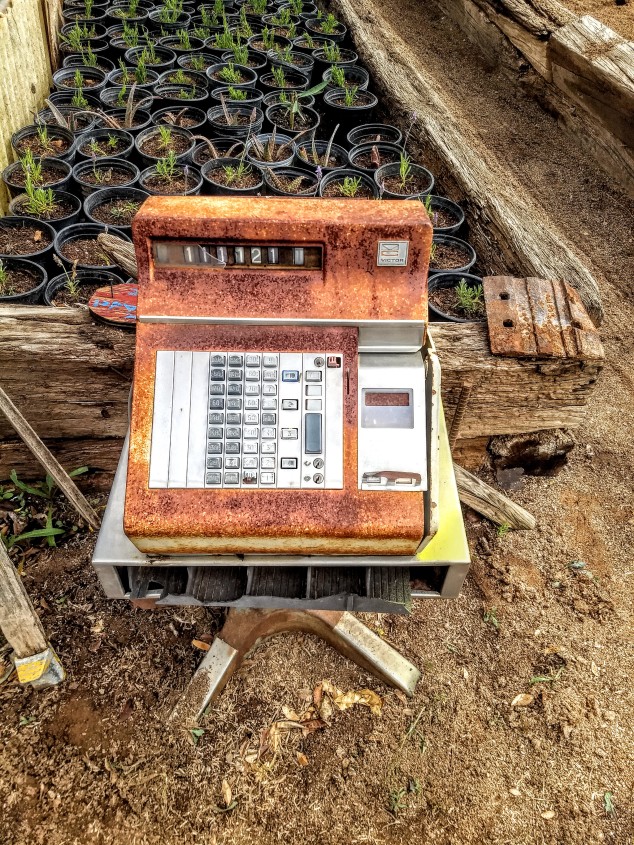 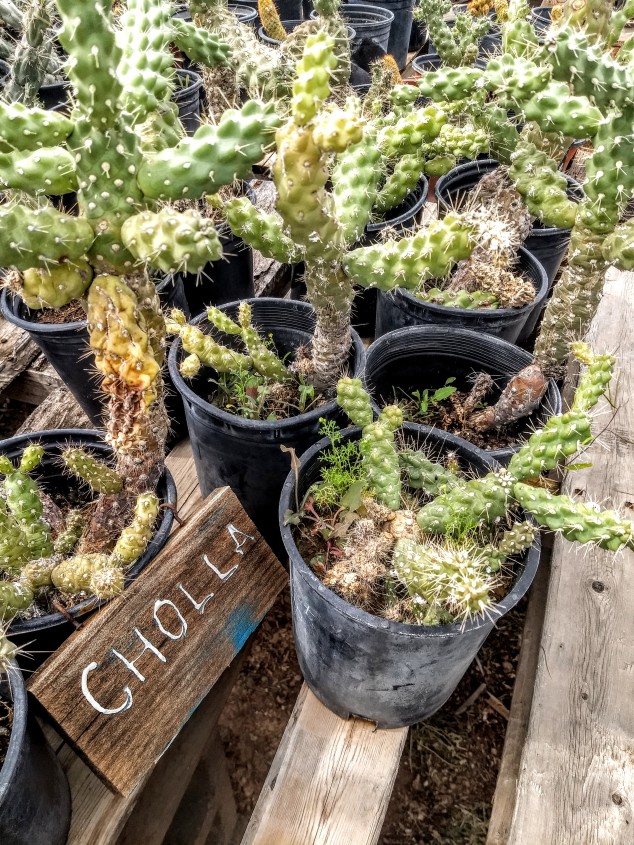 Cholla, these things can stick in a dog so easily.

This is the same type of cactus we have. Ours is huge and a bird is nesting in it. 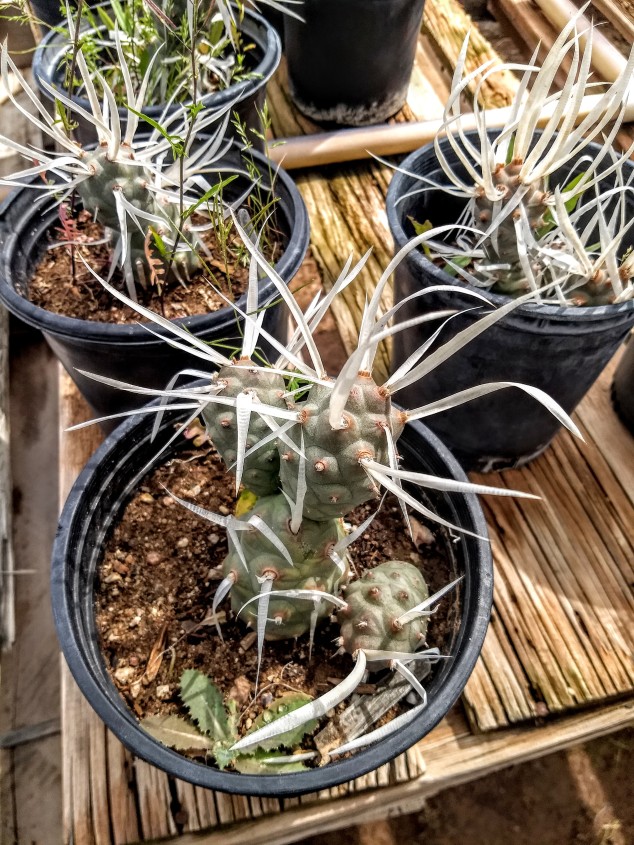 Reminded me of sea creatures. 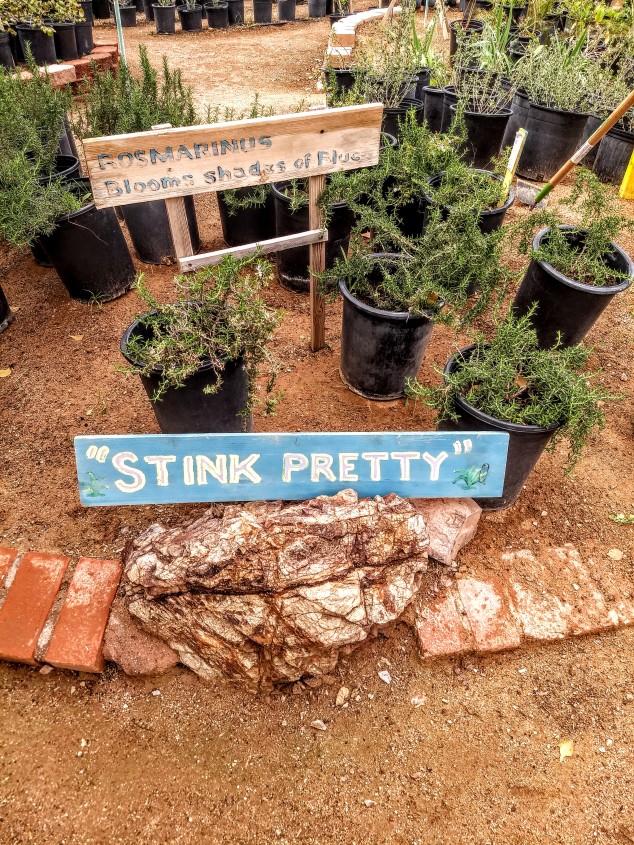 I almost bought some Rosemary but didn’t feel like dealing with it.

While he was here I decided I needed some houseplants so I bought 2 nice pottery pots at Lowe’s and got a Dracena and a Sansevieria (snake plant). Bill helped me pot them and bring them inside. I would like a few more indoor plants. At one time when I lived in a cabin on the Loyalsock Creek in PA, I had over 80 indoor plants. I spent all my time at greenhouses, I was obsessed.

Bill took a LYFT back to the Phoenix airport. His flight was at 12:40AM and I detest driving in the dark. He got home just in time to be on a small island that has shut down. Many tourists are stranded there, the Canadian flights came empty to take the Canadians home but the US carriers haven’t done that yet, I read that they will soon begin to pick up US travelers that are stranded. People think being stranded on a tropical island would be the shits. Well, it’s not. Granted they have not run out of toilet paper and eggs like in the US but they have the island on lockdown right now. People are to stay at home. It amazes me how many people don’t pay attention to the rules and have their own little pool parties. Stupid. The craziest thing to me is the government saying there are no reported cases on the island. REPORTED is the keyword here. A few weeks ago, when this was just getting to the US but was all over Europe, 20,000 people (from all over the world) came on cruise ships in one day. They shopped in local stores, they were picked up by locals who do tours, they went to the beach and bought from locals working there. You tell me none of those 20000 people were asymptomatic. HAH. The virus was more than likely passed on to a local and then taken back to the colonias where the majority of the homes have no running water and rarely have soap and never have hot water or hand sanitizer. These are the people who don’t have rolls of toilet paper stacked in their pantry. The colonias are where many elderly people live and Roatan also has a very high number of diabetics on the island, they are more prone to this disease. The Corona Virus is there and anyone who thinks it isn’t is just kidding themselves. No cases and no reported cases are two entirely different things. I hope for the best for the island, I have many gringo and island friends there and Bill is there too. I am constantly telling him to stay home as I watch on FB the gringos having parties and ignoring the orders to close their businesses down. I hope I’m wrong about the virus but realistically, I find it so hard to believe it’s not on the island.

I’m still walking the dogs daily, my tendinitis is pretty much healed. I swear using the kinesiology tape helped me, YouTube videos showed me how to apply it. YouTube is amazing. I couldn’t get the front mats out of my car (kind of dark in the garage) so I YouTubed how to get them out, duh. It was so easy, even in the semi-dark when I realized what to do.

I alternate which dog goes first on our walks and figured out the easiest way to remember. When I walk one, the other 2 go in their crates. When I return I put the leash in the front, middle or back of the crate so the next morning I can figure out the order. 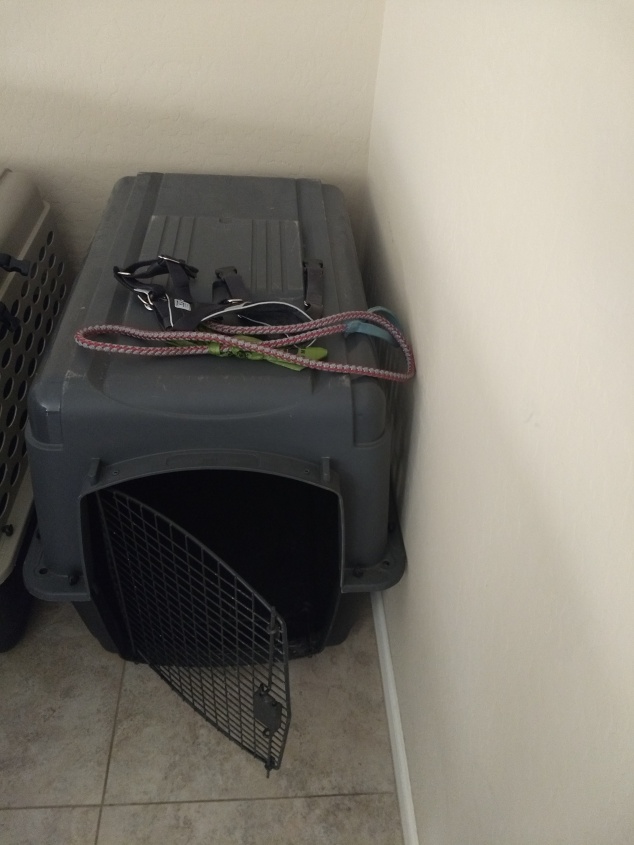 Gringos crate, he was first this morning. He’ll be last tomorrow.

Max was second, he’ll be first tomorrow. He always poops on his walk, just love carrying that steaming bag around.

Barrio was last today.  He’ll be second tomorrow. See, there is a method to my madness.

Being my OCD self, I decided to change from all the colored scrapbooks I have to plain black binders. This was more of a task than I thought it would be as I had to punch holes in all of the page protectors so they would fit in the new 3 ring albums.

Now I have them in 7 new books. I just ordered one more because one is overly full. I also ordered some binders for my 8.5X11 books and my 8X8 scrapbooks. All black, all the same except the 8X8 isn’t available in a 3 ring so I just ordered black. I posted on one of the local pages that I had 17 scrapbooks free for the taking. They were gone in 15 minutes.

I saw my first Arizona scorpion on the wall above the dog food dishes. It was dead as soon as I squashed it. I called the pest control right away and they came and sprayed.

Things are beginning to bloom, spring is on the way. I can’t wait to be able to get into the pool, it’s still 64 degrees.

New growth on the trunk

Growth all the way up the tree, can’t wait to see what it looks like in a month.

New shoots all over. 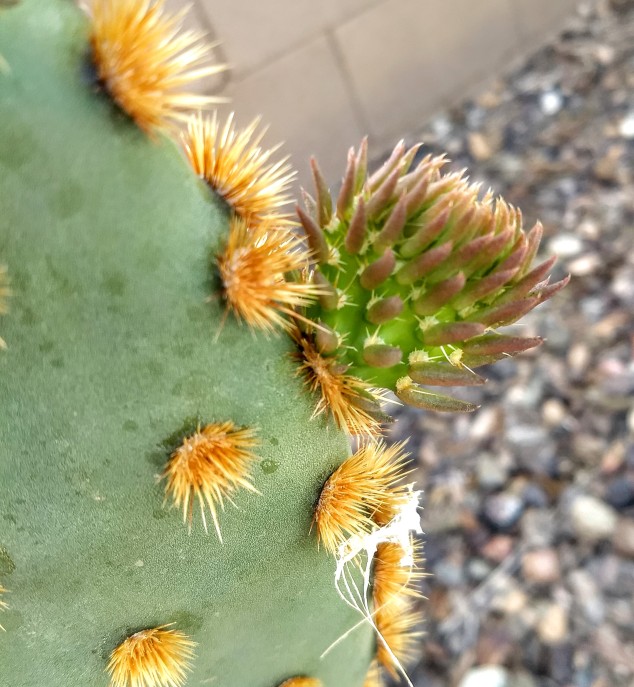 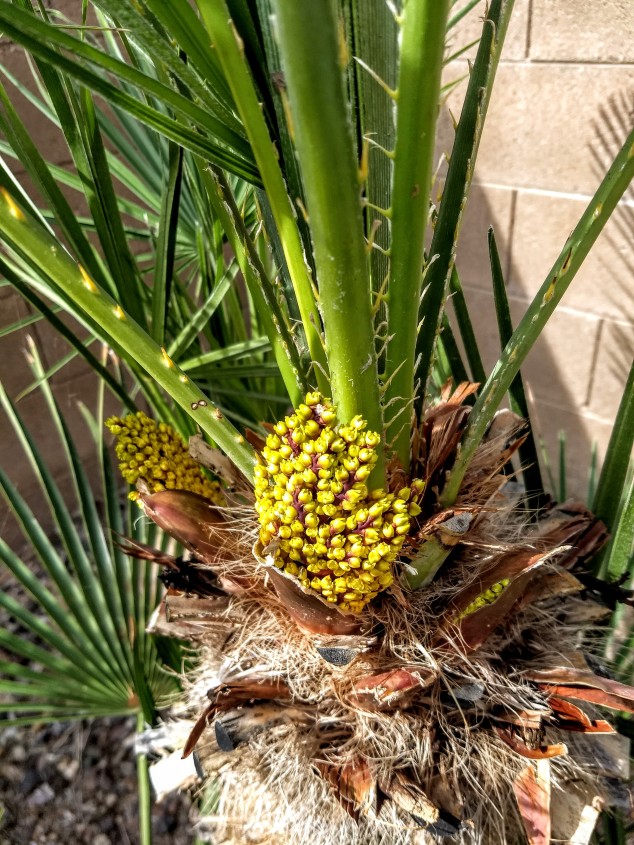 My oldest granddaughter Alexah was to come and stay with me for 2 weeks but I doubt that is going to happen. She was coming on April 1st. I had all sorts of things planned to do with her, even bought tickets for an event in Scottsdale but I’m pretty sure it will all be canceled.

The boys were all in dog training classes. Max went Saturday, Gringo Friday eve and Barrio on Not helping much at all. The classes have been postponed but at the last class, Max sat with his back to the room and stared at the wall for the full hour. The teacher cracked up every time she looked over at him. Maybe he was social distancing, who knows?

And there you have it. I’m going to take the dogs outside for a while then curl up and read.

If you know anyone interested, here’s a link to our house. It’s a really crappy time to be trying to sell a house! https://www.youtube.com/embed/Mx1HH2FLC3I

2 thoughts on “Social distancing is my uber skill”