06/25/2020 By the time I get this posted it will be 6 months that I’ve lived in Arizona. I never thought I would feel stranded in my new hometown, but I do. Not to the extent that Bill and my friends on the island are feeling, only allowed out one day every 2 weeks, but stranded nonetheless. I can go to the stores when I want to, mask-wearing is required, but I am allowed out.

The idyllic, previously non-covid infected island of Roatan has more cases than they can currently handle, Honduras as a country, is a shit show. The country is/was very unprepared for a virus like this to hit an already besieged, impoverished place. My heart aches for everyone there, ex-pats and islanders alike, they’re all living in a strange new time, cut off from the rest of the world. The Governor and the congressman, Dino and Ron, have been working nonstop dealing with a very unstable main government, very trying times.

Nobody knew in January that mid-March would become a house of horrors for the world. Bill was here visiting for a week and left the 12th of March, the island, and the world as we knew it shut down soon after his return to Roatan. We are all hoping and praying that the virus can be contained and that the people living there can soon start making some money. Remember, there is no unemployment or welfare. If you’re out of money, you’re out of money. Nidia (BECAUSE WE CARE, SOL, ROARESCUE, LIVE AGAIN MINISTRIES) and  MANY MANY other organizations have been supplying food as fast as they can get money to buy it. Food is a continual need, it’s gone in 5 days. If anyone is interested in donating please email me at ledfutt@gmail.com.

So, it’s been the boys, me and my sucky injured ankle. My ankle has not healed so I went to a new foot doc. He took Xrays, nothing broken (good) but he thinks I may have torn a tendon(s) so I had an MRI on Saturday. I see the doc again on Thursday. I’m still walking the dogs 3 miles a day and many days end up with 5 or 6 miles a day after cleaning or going shopping.

I got my sewing machine out to do some alterations to the waterproof covers I got for the chairs the dogs sleep on and the tension was all screwed up. I posted online and was given a name so I called and got their address and took my machine over. 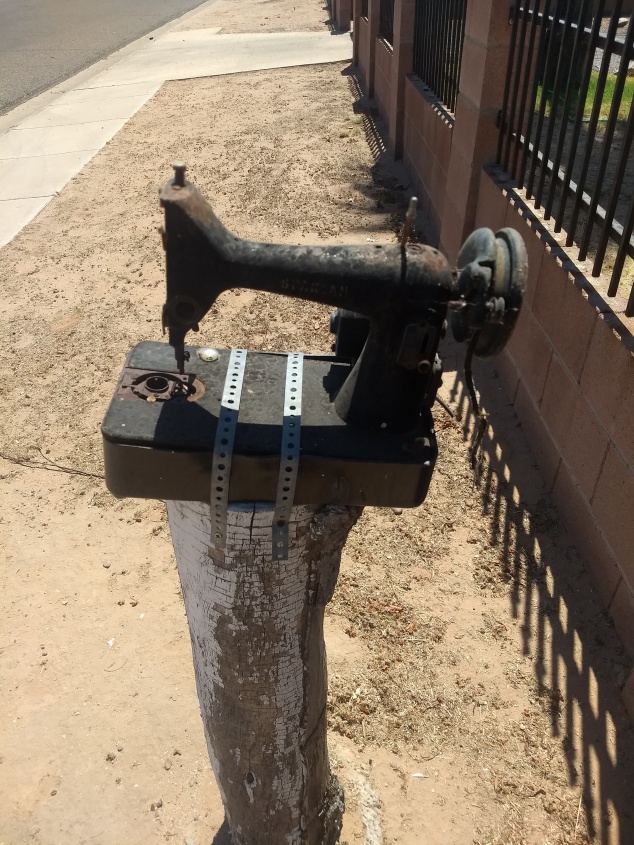 I figured I was at the right place when I saw this by the mailbox. The man was so sweet, he fixed my machine and got it running great again.

The day after I got it back,  I decided to fix my swim skirt and the chair covers. I did the swim skirt, tried it on, it was ok, then started on the chair covers but ran out of elastic. I put the dogs in their kennels and ran to Joann’s and then to Michaels to get elastic and some other stuff. I also stopped at the grocery store. After I got home I realized I had gone all of those places in my SWIM SKIRT. OMG.

The last time I took the dogs to the vet my A/C stopped working on the way home. I called a local garage and scheduled an appointment. They said my condenser had a leak and I needed it replaced, $500.00. I knew we got an extended warranty on my car so I called the dealer and they said it if was indeed a bad condenser, it was covered. I drove it up there and dropped it off. They gave me a 2020 Honda Civic loaner car. Nice car but it was so low I practically had to get on my hands and knees to get out of it.

That was a Tuesday. They called the same day and said it was covered. PHEW!! The following Monday they called and said the car was ready. I was so grateful to have my car back. For Honda to do the work it was double what the local shop would have charged. When the warranty expires, I will not be going to the Honda dealer for repairs.

I’ve been cooking/baking a lot more than I did the last 7 years. I made 2 pans of 5 cheese lasagna (no meat), almond biscotti dipped in chocolate, blueberry zucchini muffins. Problem is, I’m eating it too.

My friend Laura gave me 2 pork sirloin roasts so I cooked them and made pulled pork. I have a lot of it in the freezer, it will last for awhile and is so good. Yes, I eat pork, it’s white meat.

I’ve also been cooking for the dogs. Beef liver is cooked in the crock pot in the garage because I can’t stomach the smell. Then I cook spinach, peas and carrots, beans, lentils and zucchini in a huge pot and add the liver when it’s cooked. They love it and all of their skin issues are clearing up.

Olivia thought it was Italian wedding soup, whatever the hell that is. This will last 3 weeks maybe. I made it June 14th and I only have the big container left in the freezer.

I have a huge cactus in front of my bedroom window. I was not particularly fond of it until it did this: 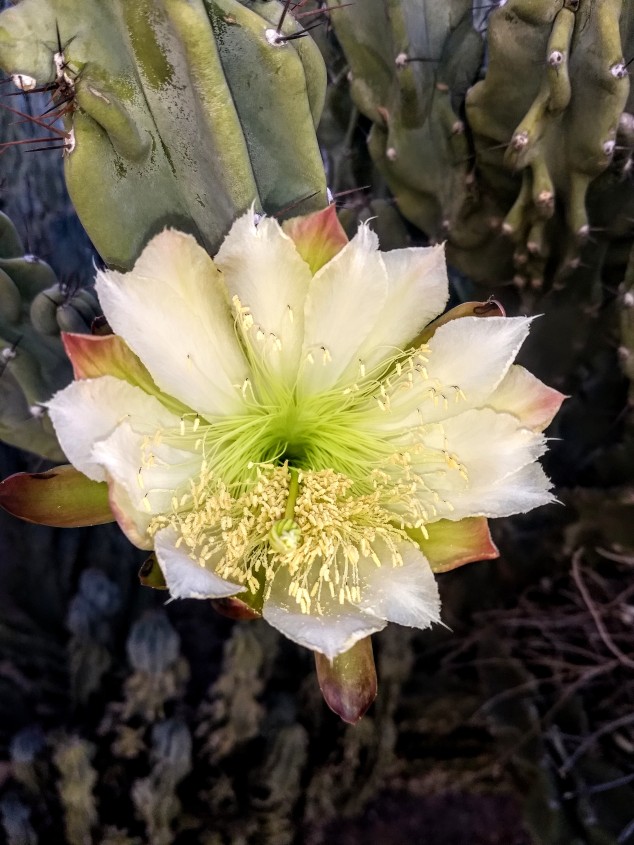 It’s a Cereus hildmannianus QUEEN OF THE NIGHT. Below the flower you can see the bird nest that has been there for several months. No eggs, no babies. However, it has a resident evil bird. 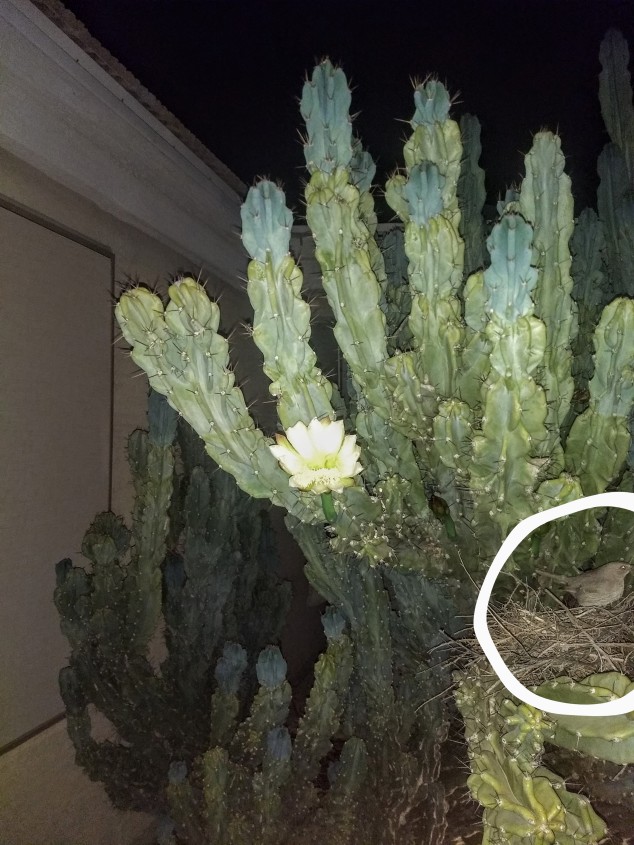 This bird sat there while I took flash photos.

I get all Alfred Hitchcockish with this bird and it’s spooky eyes. I make sure to have glasses of some sort on so this bird doesn’t peck my eyeballs out.

Then last night there were two, just glaring at me. They’re ganging up, I know one night there will be a flock of Angry Birds attacking me.

This only bloomed once, no birds either. 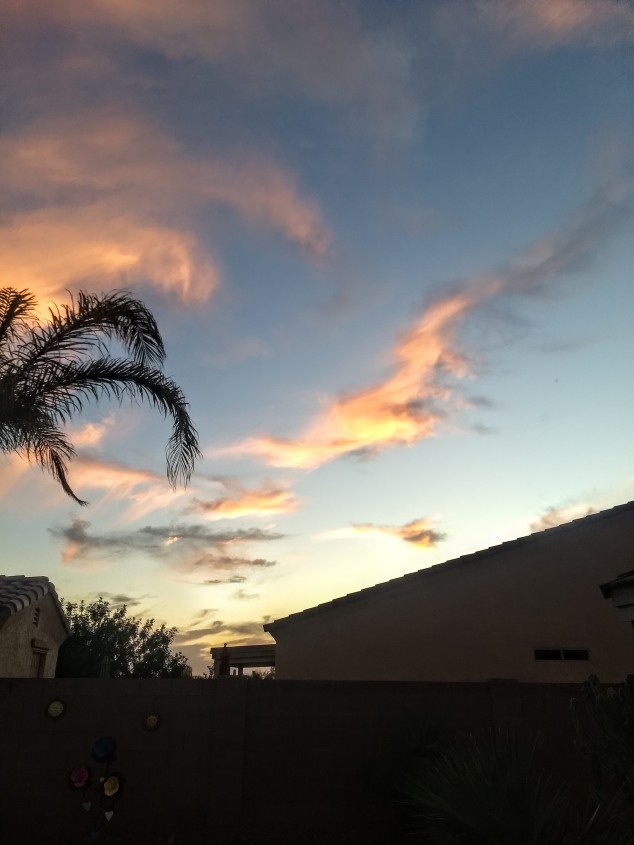 Beautiful sky, too bad I’m way too lazy to use my real camera.

The deserts’ answer to bubble wrap. I have so much fun cracking all of the seed pods on the sidewalks and roads. I’m 7 years old again. This is Max on his morning walk.

Butt brothers getting a drink

Max is so obnoxious. When he wants something, he wants it NOW. He wanted inside and I was ignoring him. He hits me too, full-on hauls off and cracks me with his paw. He is so spoiled, I’ve started grabbing his paw and telling him no but he’s persistent.

My friend Lowanna saw this card and sent it to me, I love it, can’t wait until she can come visit!

Another friend Paula made these 2 bracelets and sent them to me. I love them because the colors resemble the desert colors. I don’t know how she can do something so intricate. I love them. 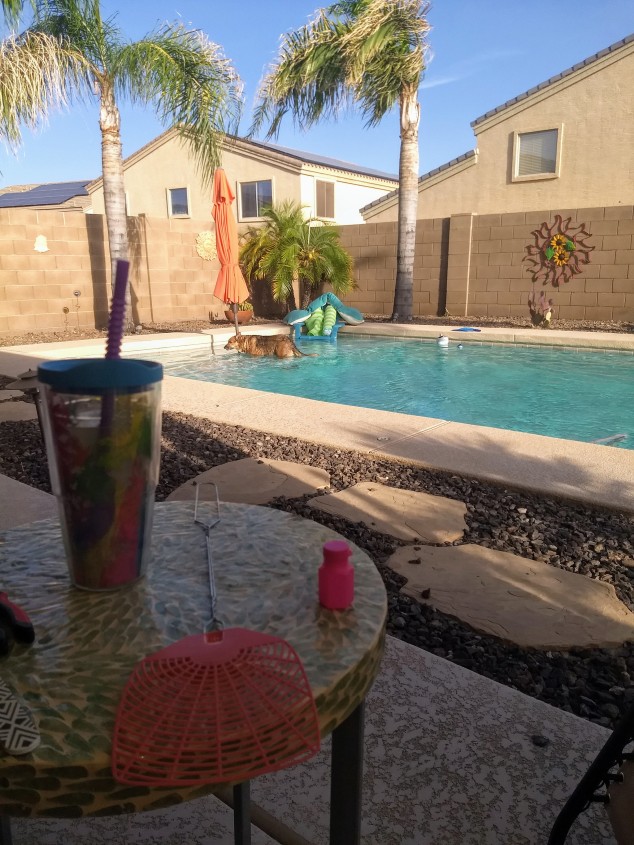 They like the ledge on the pool. We’re having a guy come and run the pool water through a reverse osmosis system to get some of the calcium out and make the water better. The water here is so hard and so much calcium in it that everything gets marked. Especially my skin.

The photo isn’t hung crooked, I was too lame to stand up to take the photo. I ordered this “Pulp Fiction” print off of Red Bubble. I love it!! (I listen to a radio station broadcast from a prison here in AZ, KCDX. Best station I’ve ever listened to, NO talking, just music. They just played the song John Travolta and Uma Thurman danced to in the scene in my picture ^^^, The song is You Never Can Tell by Chuck Berry.)

I want to give a special shout out to my friend Cole. Cole was working at Blue Island Divers on Roatan when I did my refresher course. I got to dive with him several times, he is an absolute fish and has a great love for the ocean. He is now in Boca Raton, Florida running a camp for kids called Bubble Blowers Kids Camp. They are learning all about snorkeling, diving and caring for the underwater environment and making sure the beaches are kept in a pristine condition. If you’re in the area and have kids, this is a great thing for them to do. Cole is a PADI certified dive instructor and will instill in your kids his love for the ocean. Check him out HERE

So, here we are 6 months out, not a damn thing has changed. I have done nothing really exciting at all and I’m bored. My only guilty pleasure is Amazon and I have really cut down on that because I don’t NEED anything. I’m hoping Chance and his girls will be able to come visit this month, that will at least be some company. Things aren’t looking good for Bill getting off the island anytime soon, which really sucks, especially for him. One day out every two weeks is pretty damn sucky and there is nothing he can do about it. Keeping fingers crossed the island can get a grip on this virus and figure things out so the people can get back to their lives and welcome visitors again.