01/10/2023 Oh 2022, what a year you were. I certainly do not want another year like last year. It did us both in with a variety of curveballs we didn’t expect. We managed to get through them, but it wasn’t easy or fun. 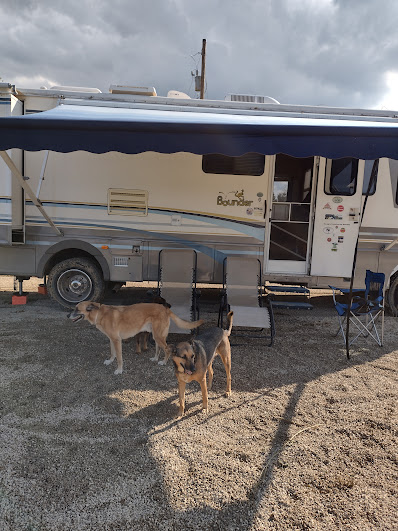 01/04/2023 One year ago we were existing in Walt, the RV that nightmares are made of. I honestly don’t know how I did that from September 1 to Feb 17th. At first, it was fun, but after 2 weeks, it was hell on earth. I know, I know, I should be grateful to have a roof over my head, and I was. For a few days. It was really hard with 4 good-sized dogs and the never-ending mud. The dogs were so good and just rolled with whatever was happening. It still was a very long 5 months.

We’re pretty well situated here right now. The weather is changing, below freezing, then 60 degrees. We’ve had some rain and that brings mud, but nothing like last year at all.

We are still walking the dogs every morning. Often Bill wants to wait until it warms up and they have a really hard time being patient. Personally, I would rather get up, get dressed and walk them, then come home and have a cup of tea and breakfast. Not Bill.

I was excited to get ready for Christmas. I had to order a new fake tree because when we left Az, I donated my tree to this guy who helps people who don’t have trees. I gave him all my ornaments too. (I had just bought them for Christmas 2021.) I think I was mentally hoping for a real tree once we got in the house. Needless to say, we didn’t get in the house for Christmas 2021 and we didn’t have a tree while we were in Walt.  I was quite optimistic (overly) because I ordered 2 sets of mercury glass ornaments for a tree we never got. 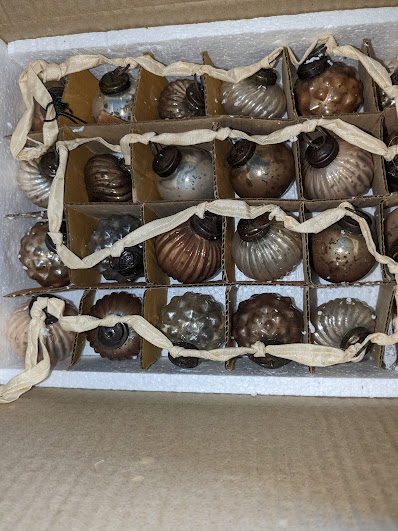 There were no live trees being sold in our “town” this past year so I ordered another fake one from Amazon. We put it up and I decided it was too small so we returned it and I got a larger one that was partially flocked.

I dug my decorations out of the containers they were stored in (since we left Washington in 2013). It was like Christmas for me, I honestly forgot what I had.

I got my crafty on and made some paper bag snowflakes. They were actually fun and not hard to do at all. I hung them in the 4 dining room windows and then we added lights and garland. It looked really nice, especially at night.

Bill and I have not purchased gifts for each other for several years. This year he decided to buy me gifts. On a day he wasn’t home, my first gift was delivered. It was not in another box like it was supposed to be. I knew right away that I was getting a new Canon photo printer. YAY! Except now I had to buy him gifts. Bill is really hard to buy for because if he wants something, he buys it. I must have been complaining about what to buy him because he sent me a message with Amazon links in it for what he wanted. I bought him everything on the list except underwear because it wasn’t Amazon Prime and I am not paying for shipping. I did buy him a few other things that I thought of on my own.

I baked way too much over the holidays. I made almond biscotti dipped in chocolate and sprinkled with crushed candy canes, molasses cookies, ginger cookies and coconut macaroons. I ate a good portion of everything, it was ridiculous. I made a nice container for the UPS guy and for our neighbor who lives alone. We still had too much.

Christmas was hard. We had to put Gringo down on Dec. 21, the darkest (literally and figuratively) day of the year. Horrible horrible thing to have to do but we decided to do it out of love for Gringo. We both wanted him to be pain-free and that was the only solution. I can’t write anymore about him, it’s still too soon. Our hearts are broken.

We did get an inch or 2 of snow, the dogs were happy playing in it. It was so cold out (below zero) that the ground was frozen and we had no mud, for a change. The temps were crazy cold and with the wind, it was downright bitter, but it didn’t last too long. Pretty soon the temperature was 60 degrees and sunny. I’ve been told that February is the month for winter weather around here. Last year was a blur so I don’t really remember.

I’m currently on the hunt for a new pair of boots. I wear my ugly muck boots daily but I wanted a pair of boots to wear when I go places. Just typing that sounds ridiculous because I rarely go anywhere. Anyhow, through Amazon you can do try before you buy if you’re a Prime member. With try before you buy you can get 6 pairs of boots or bras, tops, swimsuits, whatever, sent to you, keep what you like and return what you don’t want. If you return within 7 days you don’t get charged. Well, I got my first shipment of 6 pairs of boots and didn’t like any so I returned them and ordered 6 more pairs. I liked a pair of Ecco but not enough to spend close to $200 on them. I returned them all. I ordered a pair of boots from Born and I could hardly get them on. I wear an 8, I swear they were a 6.5. Ridiculous, I returned them. Then I ordered 3 pairs from Zappos. The first pair are Cole Haan and they’re really nice but I can feel the stitching inside the boot when I’m wearing them. That’s a no. I’m currently awaiting on UPS for the other 2 pairs. If I don’t like any of them I might as well wait until next fall. This is what buying boots when you live in podunk Burkesville is like. Frustrated.

Update: UPS brought the other 2 pairs of boots today. They both hurt my foot. The left boot is fine, unfortunately, I still have the R foot to deal with. I’ve had 2 surgeries on that foot and it’s been in flip-flops since 2013. It feels very foreign to wear a closed shoe other than my Skecher slip-ons, which are stretchy. I feel doomed. I’d like to keep these boots but I’m afraid to. What if they don’t stretch out and I’m stuck with boots I can’t wear?

Second update: All 3 pairs are being returned to Zappos and I ordered 3 more pairs. The saga continues.

Bill baked some focaccia bread and I made an olive tapenade for it. I can eat that as a meal, it’s that good.

This is another Christmas gift Bill got for me. It fits nicely over the tub and holds all kinds of things, especially a wine glass.

With the crazy warm temps my tulip, daffodil, iris and hyacinth bulbs are sprouting through the soil. I hope they’ll survive if we get another cold snap. I’m really looking forward to planting more this year, we got such a late start last summer.

And that’s a wrap. I have nothing of interest to tell you. We (as in Bill) will start painting the inside of the house, soon as I pick out the colors. I hate doing that because colors are never really what they seem. If I choose a paint color and he paints and I hate it, too bad so sad for me.