The morning after the Rehab concert we delivered my beloved Pilates Allegro Reformer to my friend Jill’s Pilates Studio, Core Pilates. It has been sitting in the downstairs unused by me and I felt guilty as hell about it. If I haven’t used it in 2 years, I’m not going to, I’m getting older, not younger. When I messaged Jill to see if she was interested in buying it she was amazed because, like she says, “who owns a reformer?” Well, I do and back in Washington I used it almost nightly. It was also a fabulous prop for my crazy friend Kevin to perform on during our parties.

Most people don’t see a Pilates machine and have hysterical fits of laughter from memories about a friend using the machine. I feel sorry for them and grateful for all of our gang in WA who were able to experience the hilarity of Kevin performing feats that we never thought were humanly possible on a Pilates machine.

When we got home we piled the Beach Boys in the car and headed for Big Bight for them to go swimming. They knew where we were and literally FLEW out of the car and ran to the beach. Excitement was coursing through their veins. So was the testosterone, but that was in their brains. They were scrappy. 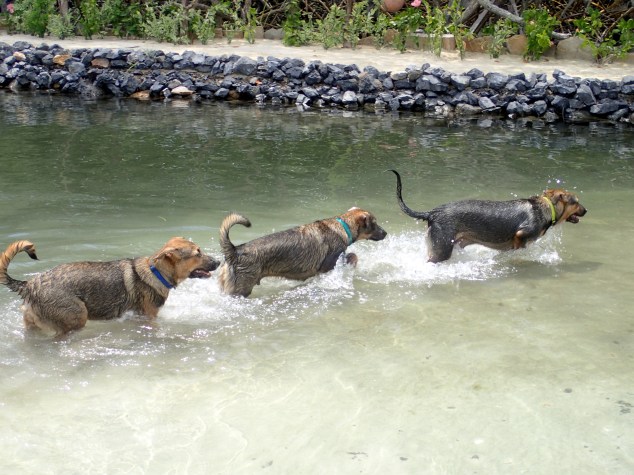 We love our Beach Boys. These guys are getting huge, Gringo, on the right weighs 40#, more than his Momma and he’s only 6 months old!

They chased each other around this small key most of the time we were there, under the logs, over the logs, around the edge, run in the water, back out, jump and snarl, run some more. I just stayed out of their way. 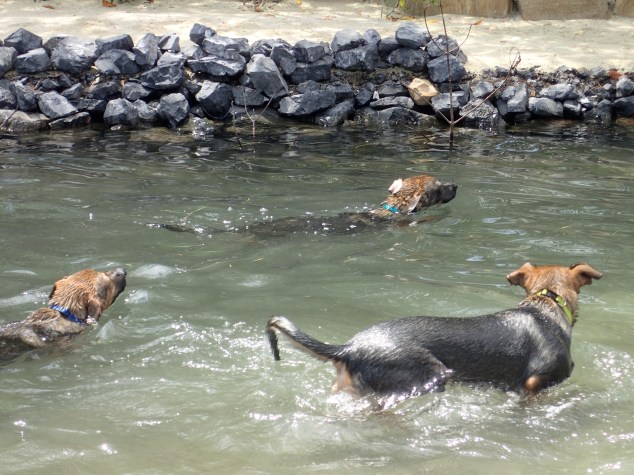 They sure love to swim!

And roll in the sand

Love the unusual palapa roof on the dock next door 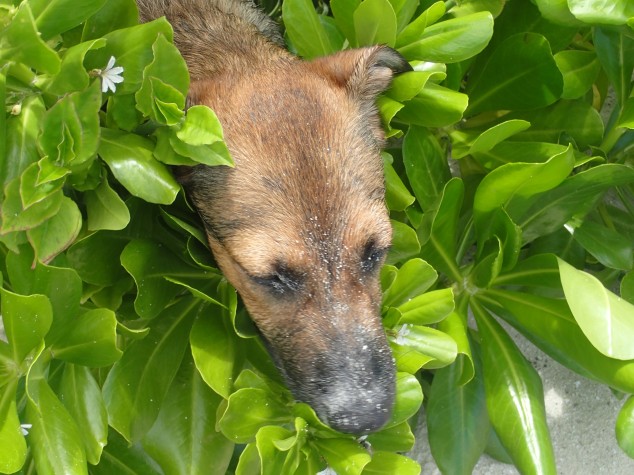 Ilias from Pineapple was there with a drone.

When the pups were tired and laying around, too pooped to play any longer, we brought them home and I had the fun job of bathing all 3 of them and then I bathed Frito too because she stunk.

We have been spending many evenings on the roof, watching the sun go down. The dogs love it up there, they “guard” the property quite well. It also gives them a large unobstructed battlefield. OMG. It gets crazy up there with 5 dogs running laps. 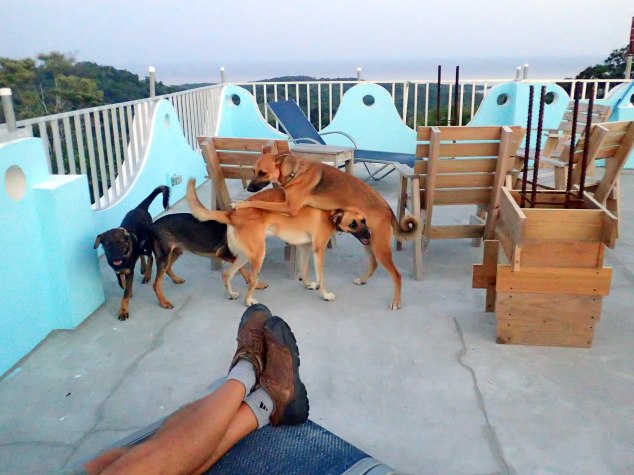 Lola climbs on Highways back all the time, I believe it is her showing her supposed dominance. 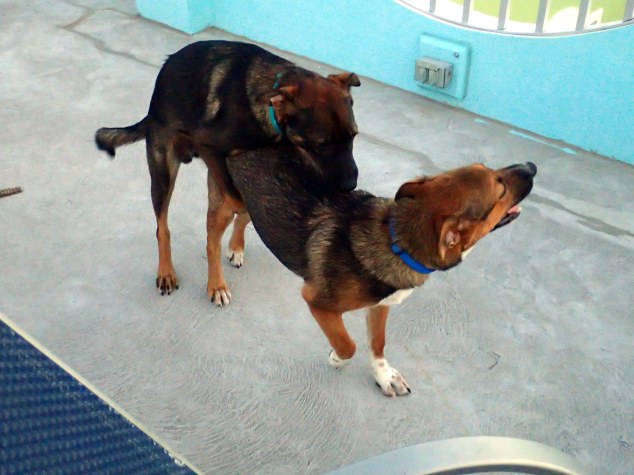 Testosterone running extremely high. The rule around this house is “You don’t hump family.” Max didn’t get the memo.

The most loving dog in the family, Highway. 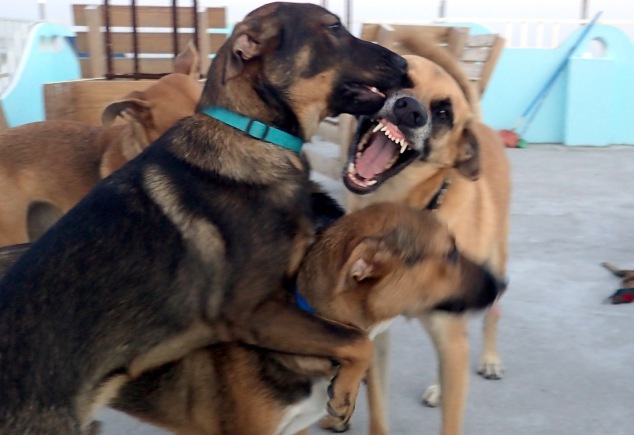 He scares no-one. They lick his gums. 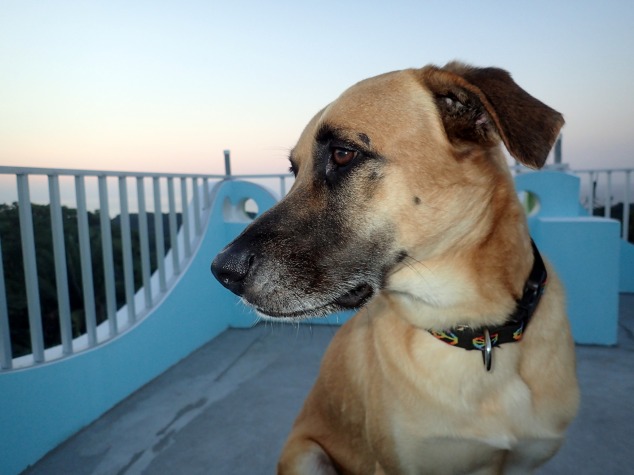 She is a gorgeous dog but “the lights are on and no-one’s home” This girl is totally lost in space.. 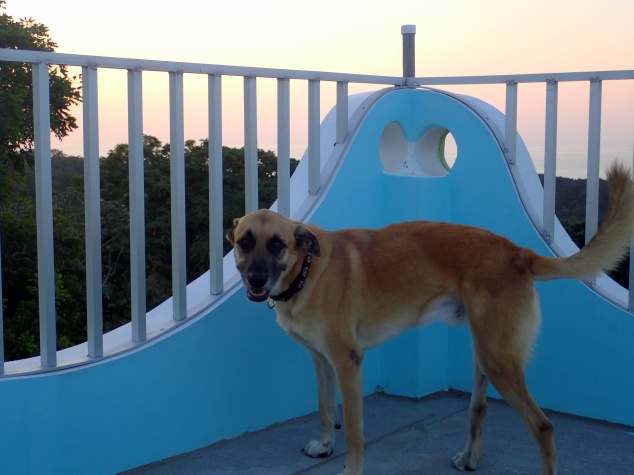 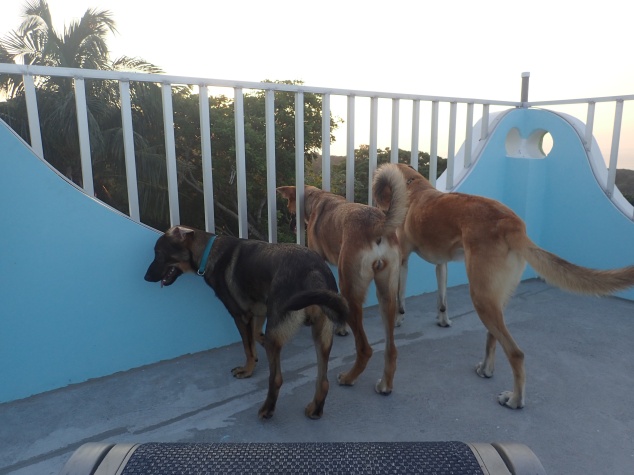 They love to stick their heads through the rails. Before the rails, they leaned over the edge and we were always afraid they would get rough housing and someone would fall off, one of the main reasons for the rails. Well, the dogs and people.

Bill bought a whole chicken for the dog food and threw it in the crock pot for 5 hours, then we added veggies and cooked rice. It makes enough food to add to their dried food for about 8 days. The chicken turned out really good.

They love raw zucchini and carrots

In fact the chicken was so good, we made one for ourselves the other evening and invited Mr. John, our neighbor up for dinner. I made mashed potatoes, stuffing, the whole works. Biggest meal we have had for a long time. I also made my all time favorite peanut butter pie. I could eat a whole one alone, and then puke for 2 days.

After dinner we were cleaning up and Bill was feeding the pups some scraps. They were salivating all over.

I LOVE Max’s eyes in this pic. 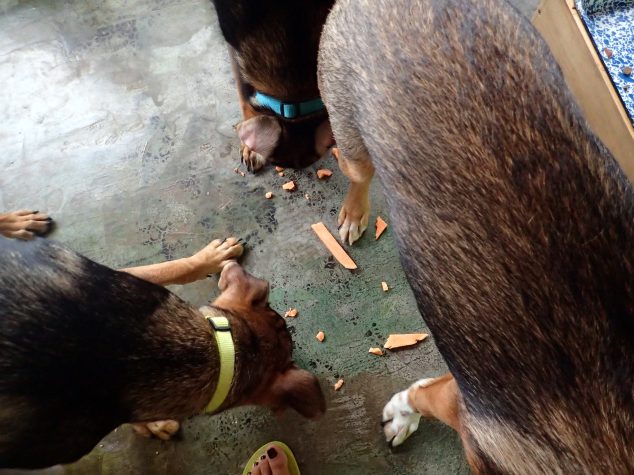 This is raw sweet potatoes, they LOVE them. I also dehydrate them and freeze slices, they will eat them all 3 ways.

I’m fortunate my dogs match my floors, that way I can trip over them several times a day.

The other day I got the brainy OCD desire to organize ALL OF THE DOG COLLARS (from Helping Paws Across Borders vet team) that were in 2 huge bags in my spare bedroom. Frito bean decided to help me.

There are so many collars and after being used for 2 weeks, they were all mixed up. I LOVE to organize. 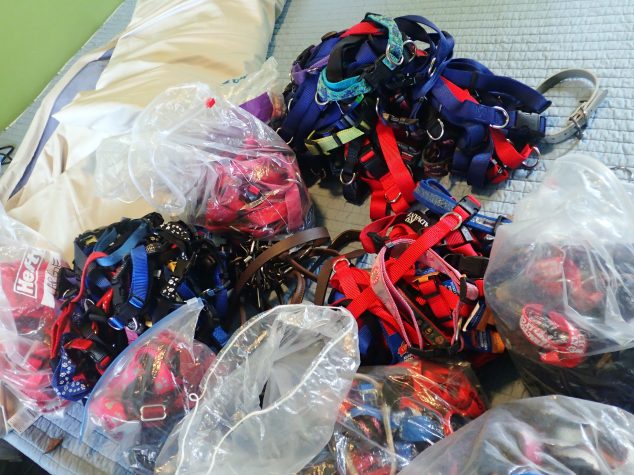 I did not do them by color, only by width and size and style. 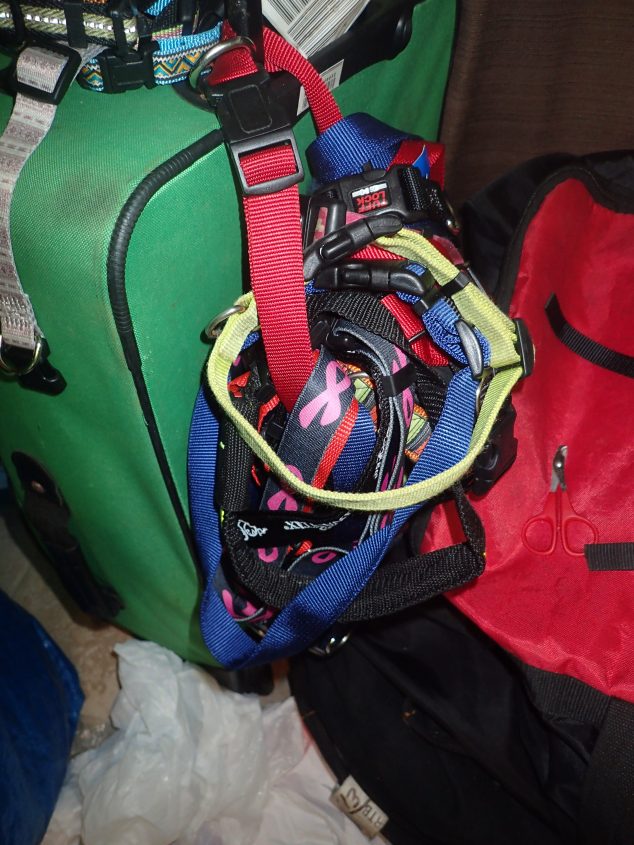 It was fun but when I was done I couldn’t stand up straight because I had been leaning over for an hour+.

All in one bag now. Only 10 more suitcases of supplies to organize but I think Kathy and I will do that with a bottle of wine.

Today is Thursday, tomorrow is the 100th birthday party for Aunty Clara in Coxen Hole and Saturday finds me back at the airport again. I still have one more blog to get out today about our day in the jungle with Doña Maria, it was so amazing. If the dogs keep on sleeping and I can keep on concentrating, it will be published later today.

Another Friday, another afternoon at BJ’s with my new personally set limits. We took Maxillicious with us because he has been aggressive with the other 2 boys. Can you say TOO MUCH TESTOSTERONE?? He was so good I was amazed. He just laid on the floor and watched the people, he didn’t bark or jump up on anyone, he acted like a well trained dog. Marilyn and I discussed plans for the next night even though Carmen and Brett weren’t there. 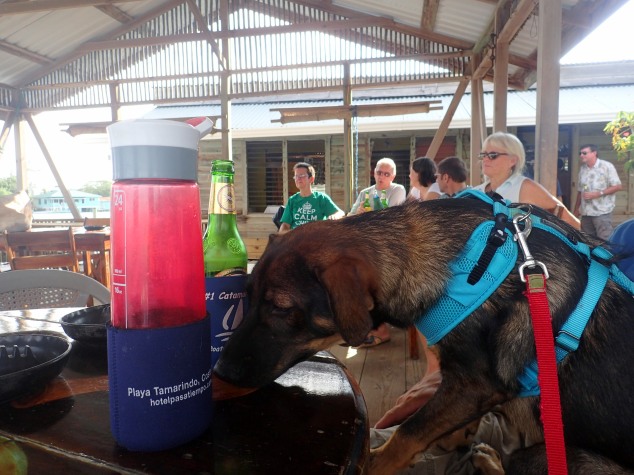 Not a lap dog 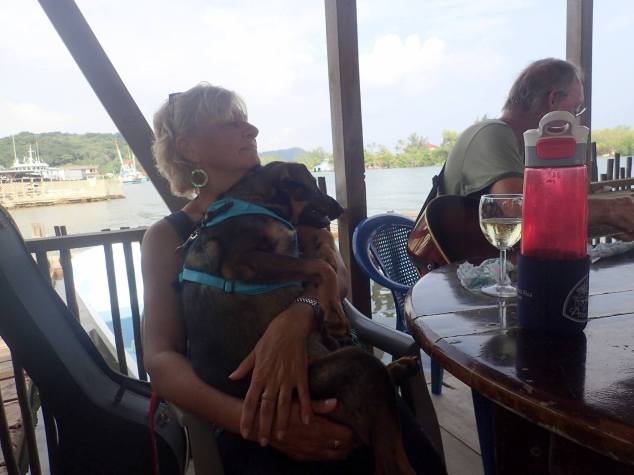 But he’s my sweetie and I hold him anyhow

Saturday evening was the second Because We Care concert to raise $$ for Rehab  for Ursula and Frances. They are 2 ladies Nidia has known for a long time and is doing her best to get the money to ensure they complete treatment. The concert was downtown at the Juan Brooks School. We wanted to support Nidia in her efforts and we also wanted to be there to wish her Happy Birthday. We got there early and the concert was running late. Honduras. So we did what anyone else would do, we walked to the grocery, got beer and wine and drank in the car. Actually Bill and Alex went to get the booze, we sat and finished off the first bottle of wine with the music on and the door opened. Carmen had to pee so she found a dark corner of the parking lot to go. Unfortunately she peed on her new sandals because she peed crooked, the sandals were sparkly too. But that’s not why she peed on them. Just about the time Carmen went to pee, Nidia walked by. She had no idea we were there, it was really weird. We were happy to see her, she looked gorgeous, well, she is gorgeous. We had a few things for her birthday so we gave them to her there. I also handed her my half full orange (never done an orange Solo before, only red) Solo cup of wine. She informed us the concert was for drug rehab, not alcohol, we were cool. Not that we needed rehab or anything. We went to the concert and the guest singer, Ursula, the lady that was in rehab for drug addiction, was 2 hours late. TO HER OWN $$$ RAISING CONCERT, SHE WAS LATE. She was getting her nails done. Marilyn had a water bottle with wine in it (@ the Rehab concert) and Carmen had her own orange Solo cup. 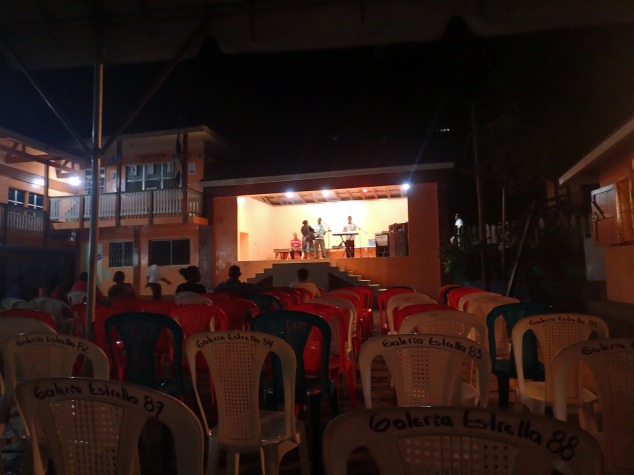 Our view from the back row

Nidia, Ursula, Irenne and the guys in the band

I think at one point I had the cup, passed it back to Brett to give to Carmen and she proclaimed, “No, I’m too drunk and hungry to drink anymore”. {They tried to make me go to rehab, I said no, no, no.} The lady in front of her turned and scowled, after all, we were at a Rehab concert. I walked out front to talk to Nidia and on the way back inside Marilyn and Alex were walking towards me, Alex came up and grabbed me and started swirling me around this parking lot that had crater size holes in it, dancing.  Yes, we were the only people dancing. I had on 3″ wedges for the first time in over 2 1/2 years, I could barely walk, let alone dance. It was wonderful.

It was getting late and none of us had eaten so we left the concert for Rehab b/c we were lacking sustainable nutrition with our wine. We went to Romeo’s, a fancy restaurant, for dinner. It sits on the water in French Harbor and my friend Connie and her husband own it. {She is the lady who started Cattleya school for the physically and mentally challenged students. I go there and help when I’m needed.} As soon as we got there Bill got a call from a neighbor who said our dogs were barking like crazy. We thought, oh well, there’s a rabbit..then our other neighbor calls, he’s 86 and deaf as a doorknob. He heard them too. He said he would walk up and then call us. He didn’t call so Bill called him and he was at our fence and the dogs were barking so loud they couldn’t talk. By this time we had our drinks and were deciding what to do.

Brett sure is eyeing Bill’s beer

The ever gorgeous Marilyn and Alex! What a couple..

We all placed our orders and five minutes later decided we have to get them “to go.” Right before our meals were ready to go we got another phone call that the dogs had stopped barking. Hmmmm. What does that mean?

Obviously because Alex is absent from this photo, I was Marilyn’s love-sub. Alex was being a gentleman and getting the car and waiting, and waiting for us..No blame on the restaurant, we ordered a lot of food to go.

It means it’s time to pose for pics while we wait for our food to be done, then we jumped in the waiting car and came to our house.

Carmen balancing the food, Brett balancing his beer. Love these 2.

The Beach Boys led by Highway were barking when we came up the hill but not that much. Frito was doing her f*cking seal impersonations, UGH. That drives me crazy. Seriously, she sounds like we have a Flock of Seals inside. {And the guy that was going to give her a new home said she doesn’t bark. OMG.} Anyhow, we get home, go upstairs with eleventy boxes of food, bag of ice, random beers and some wine that was diluted by ice cubes. The dogs were fine, the house was secure and they were barking BECAUSE THEY COULD. We weren’t here to stop them.

We all stood around our island and ate like a bunch of starved heathens. Once all of our bellies were full, we all wanted to lay down and sleep. Marilyn and Alex and Brett and Carmen still had a drive and a boat ride to get home. They’re like island pioneers, or maybe pirates, whatever.

Anyhow, a completely random, crazy stupid, disrupted evening turned out to be a blast.

The tribe has spoken. They were all voted in, they can stay.